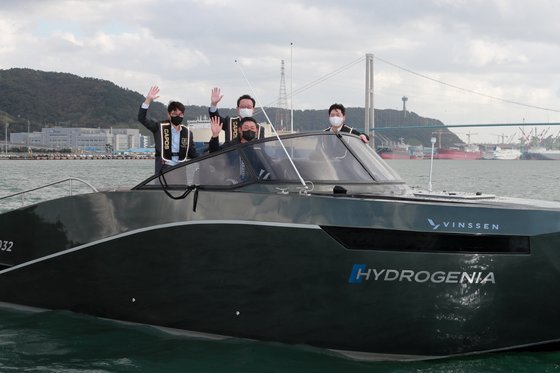 The first hydrogen cruise ship in Korea is planned to transport visitors from Ulsan’s Taehwa River as early as next year. Ulsan has completed the development and commissioning of a hydrogen vessel.

Ulsan City sponsored a hydrogen vessel test drive event at Jangsaengpo Small Ship Pier in Nam-gu, Ulsan Mayor Song Cheol-ho participated in a test run in which he boarded a hydrogen ship and drove it from a tiny ship dock to a coal pier on the Taehwa River’s boundary.

“I intended to travel to the Taehwa River on a hydrogen ship in November 2019, when the Special Regulation Free Zone designation was verified, and I was eventually able to realize that aim,” Mayor Song stated. Please make strenuous efforts to advance technology so that hydrogen cruise ships can be offered rapidly,” he added.

Four businesses were involved in the development of the hydrogen ship that was tested that day, including ‘Vincennes’ and ‘HLB.’ The hydrogen yacht can run at 10 knots (18.5 km/h) for 6 hours using just fuel cell electricity charged with 8 kg of hydrogen for 40 minutes since it is fitted with eight 51-liter hydrogen storage tanks. It can run for 8 hours if you incorporate battery power.

Because hydrogen fuel cells are used instead of fossil fuels, hydrogen cruise ships are environmentally benign and quiet. The city of Ulsan intends to float a hydrogen tour boat on the Taehwa River instead of operating the Taehwa River ferry, which was discontinued in 2013 due to an overturning accident.

After being declared as Korea’s first ‘hydrogen mobility regulatory free zone’ in November 2019, Ulsan City supported the initiative. Meanwhile, hydrogen ships have been barred from accessing the market due to the lack of facility and operational safety criteria for hydrogen fuel cells.

“Because it is classified as an unique hydrogen zone, it is allowed to aggressively test the hydrogen fuel cell industry without being constrained by regulations,” an official from Ulsan City stated.

JNK Heater and Deokyang are two of the four businesses involved in the installation of hydrogen ship charging stations. The first hydrogen charging station in Korea will be erected at the pier, and a new 2.4-kilometer hydrogen pipeline will be built to provide hydrogen directly, increasing safety and efficiency.

Hydrogen from Deokyang is compressed to 500 atm using a compressor, then kept in a pressure vessel before being sent to the hydrogen vessel at 350 atm.

Ulsan City will install gas leak detectors, pressure gauges, and thermometers at the sites of hydrogen ships and hydrogen ship charging stations to prepare for leakage incidents, and will use communication networks to monitor anomalous signals from outside (Ulsan Techno Park, Smart Ocean). acted on it Hydrogen ship charging stations are erected and operated in compliance with the High Pressure Gas Safety Management Act and other safety regulations established by the Ministry of Trade, Industry, and Energy.

Asturias to build plant for tests with green hydrogen

Korea to cut 25% of natural gas for hydrogen production