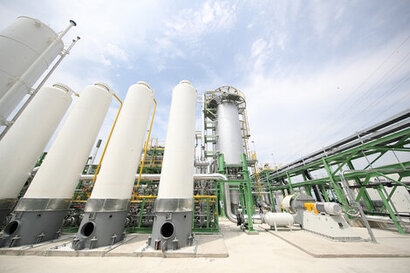 The first facility of its sort in the area around the Korean capital has opened in Pyeongtaek City, Gyeonggi Province, South Korea, and can provide fuel for 410,000 hydrogen cars annually.

The facility in Changwon City, the capital of South Gyeongsang Province, which has been in operation since the end of last year, is the first of its kind in the country and was inaugurated on July 27. The Pyeongtaek complex is anticipated by Gyeonggi Province to serve as a bridgehead in the hydrogen energy future.

Climate change is one of the upcoming obstacles we must conquer, according to Governor Dong Yeon Kim of Gyeonggi Province. “We will exert every effort to develop the hydrogen economy, with a focus on the Pyeongtaek hydrogen production complex, as one of the methods for addressing the climate issue. With a daily output of more than seven tons of hydrogen, the Pyeongtaek complex will be South Korea’s largest hydrogen production facility. I have no doubt that this complex will play a significant role in the future of carbon neutrality, he continued.

Governor Kim had previously promised to establish a “hydrogen fusion cluster” in the cities of Pyeongtaek and Ansan and turn it into a significant center for the hydrogen sector by tying it to specialized companies in the area.

Gyeonggi Province and Pyeongtaek City have plans to establish a hydrogen transportation complex connected to hydrogen filling stations close to Pyeongtaek Port when the hydrogen production complex is built, as well as to develop a “hydrogen city” that utilizes hydrogen as its primary energy source.

The Pyeongtaek LNG receiving base will supply the natural gas used in this complex to reform natural gas (a process that involves pyrolyzing natural gas using steam). Up to seven tons of hydrogen per day are expected to be produced starting in August (approximately 2,450 tons a year). With this quantity of manufacturing, South Korea can fully recharge 1,200 hydrogen automobiles per day (approximately 410,000 vehicles per year).

The majority of the 33 hydrogen refueling stations now in operation in the Korean capital region are supplied with hydrogen from far-off places like Daesan, Ulsan, and Yeosu, which are typically more than 120 kilometers distant (20 in Gyeonggi Province, seven in Seoul, and six in Incheon). The province administration anticipates a decrease in the cost of hydrogen supplies in the capital region since the completion of this complex will significantly lower the cost of hydrogen transportation.

To address the regional bias in the supply of hydrogen produced in petrochemical complexes like Daesan, Ulsan, and Yeosu, the Korean central government (Ministry of Trade, Industry, and Energy) has been planning to build small hydrogen production bases that supply hydrogen fuel using city gas near demand sites starting in 2019. Across the nation, this effort is being conducted in seven different regions.