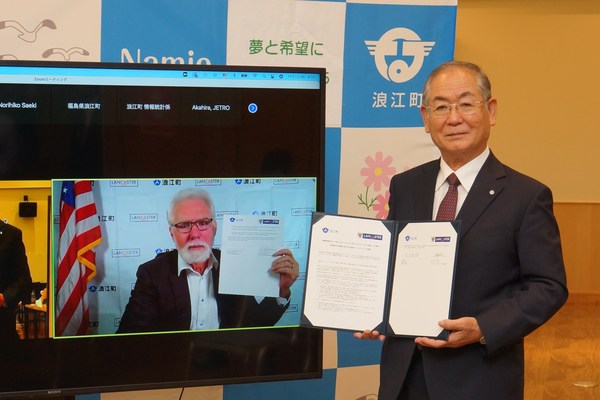 In the international hydrogen community, the annual National Hydrogen Day has brought to a close a week filled with enthusiasm and progress, which began with the Hydrogen Energy Ministerial.

Despite the fact that the Ministerial is normally a worldwide platform for hydrogen progress, this year’s promises at the local level highlighted the rising relevance of this important energy resource.

Mayor R. Rex Parris of Lancaster expressed his hope that his city and Namie would not be the last to form a relationship fueled by hydrogen: “Even if we are the first to do so,” he added. ‘Smart Sister Cities’ is a global initiative that encourages towns throughout the world to collaborate in order to reduce greenhouse gas emissions and save our planet.

Lancaster and Namie are both recognized as trailblazers in the field of municipal sustainable energy innovation. Mayor Parris spearheaded Lancaster’s clean energy transition more than a decade ago, establishing the city’s own clean energy utility company and, most recently, earning the city the distinction of being the world’s first “net zero” city through investments in solar energy, among other accomplishments. Lancaster now aspires to be the first city in the United States to completely embrace hydrogen, housing a green hydrogen production facility and anaerobic digestion plant, as well as converting City Hall to run entirely on hydrogen power in the near future. As a result of this forward-thinking vision, industry leaders such as BYD, the world’s first concentrated solar-power-to-hydrogen company Heliogen, anaerobic digestion pioneer Hitachi Zosen Inova, and hydrogen gasification company SGH2 have invested billions of dollars, created thousands of jobs, and paid billions in taxes in Lancaster.

Tokyo Mayor Kazuhiro Yoshida shares this goal of employing hydrogen technology to propel growth and prosperity in the city of Namie. His remarks at the event included the following: “The cities will focus on leveraging their particular resources to promote hydrogen production, storage, distribution, and consumption,” as well as the following: “pursu[e] a roadmap that supports economic development and social advancement.” Namie, Japan, rose from the destruction caused by the Fukushima nuclear accident in 2011 to rebuild and reinvent itself as the world’s first hydrogen-powered city. When it was completed in 2020, the town became home to the world’s largest solar-to-hydrogen factory at the time, assuring a supply of hydrogen that was so dependable that it was even utilized to fuel the eternal flame of the Tokyo Olympics in 2021.

In light of the next Olympics, which will be held in Lancaster later this decade, Kathryn Barger, Supervisor of Los Angeles County, encouraged the city to capitalize on hydrogen’s newly discovered role in the games. It would be wonderful if Lancaster could supply the hydrogen for the 2028 Summer Olympics in Los Angeles, she said at the signing of the cities’ hydrogen memorandum of understanding in July.

Other elected leaders, such as U.S. Congressional Representative Mike Garcia of California’s 25th Congressional District, have taken note of the worldwide effect of these trailblazing communities as well. His remarks included: “I wish to express my gratitude to both the City of Lancaster and the City of Namie in Fukushima, Japan for establishing “sister cities” in their commitment to the promotion of hydrogen as a sustainable energy source for transportation and power. The future of Lancaster, CA-25, the State of California, and the rest of the globe is exciting, and I can’t wait to see what this cooperation brings.”

However, despite the fact that these local initiatives have had a significant influence, Lancaster Mayor Parris has made it plain that the United States and Japan must support their “Smart Sister City” goal by investment in hydrogen infrastructure if they are to effect real change. “Despite the fact that we are delighted to be in the forefront of hydrogen innovation, climate change is not an issue that we can tackle on our own. Decisionmakers at all levels will need to make significant investments and participate in collaborative efforts in order to prevent climate extinction from occurring “he explained.

Lex Heslin, Senior Project Developer at Hitachi Zosen Inova, which advises the city of Lancaster on its Hydrogen Master Plan, shared the opinion expressed by Heslin. “Because of their geographic location, these cities are ideally suited to bring about change on a local level. Another important step is for other local and national government agencies to join forces with universities, research institutions, and the business sector to make every effort to invest in them and grow this essential platform for innovation and change.”