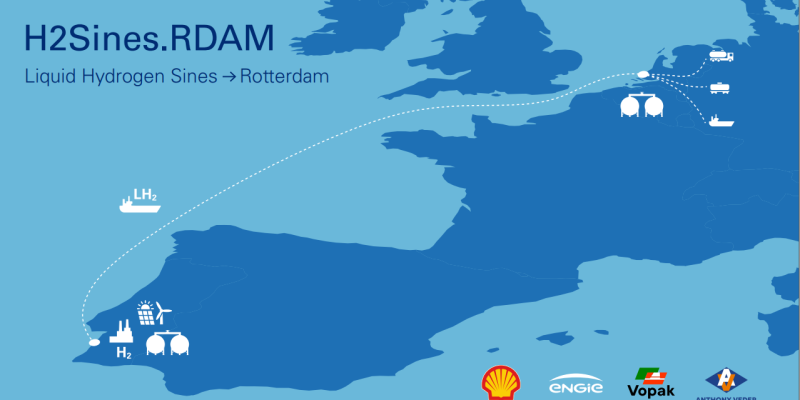 Shell New Energies NL BV, ENGIE, Vopak, and Anthony Veder have signed an agreement to investigate the viability of producing, liquifying, and transporting green hydrogen from Portugal to the Netherlands, where it would be stored and sold.

Key sector players in Heavy duty, Marine and Aviation support this development as it fits well with their intention to decarbonize operations. “We consider liquid hydrogen as a key solution to import renewable energy into markets such as the Netherlands or Germany. We are developing the next generation of trucks which can use liquid hydrogen directly” said Dr. Andreas Gorbach, Head of Truck Technology and Member of the Board of Management Daimler Truck AG.

It is necessary to increase the assurance of liquid hydrogen customers. Policy instruments that cover end-user cost increases can be an effective approach of achieving this objective. Such devices are essential for expanding the scale and decreasing the cost of liquid hydrogen production, and they have the ability to stimulate infrastructure development along the whole supply chain.

Shell and ENGIE will collaborate across the whole value chain inside the consortium, while Anthony Veder and Vopak will focus on shipping, storage, and distribution. Initially, they will evaluate the possibility of generating, transporting, and storing approximately 100 tonnes per day, with the ability to scale this up in the future.

The Portuguese and Dutch governments have increased their cooperative ambitions for the production and transport of hydrogen. This feasibility study follows the signing of a memorandum of understanding in 2020. In addition, Portugal and the Netherlands confirmed their shared objectives at the May 2022 World Hydrogen Summit in Rotterdam.