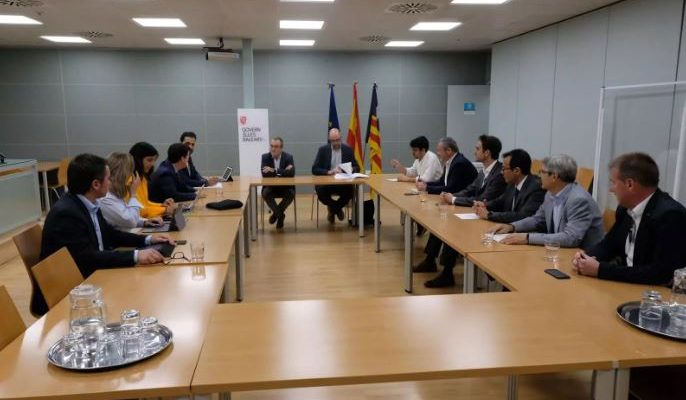 Juan Pedro Yllanes, Vice President of the Balearic Government and Minister of Energy Transition, Productive Sectors, and Democratic Memory presented the Lloseta Hydrogen plant proposal to Navarra as a pioneering example of decarbonization.

Productive Sectors and Democratic Memory, Vice President of the Government Juan Pedro Yllanes met with Mikel Irujo, Minister of the Department of Economic and Business Development of the Government of Navarra, on Monday, and conveyed the importance of the green hydrogen production project at the Lloseta plant (Mallorca), the first plant in the entire State and in southern Europe as a pioneering exam.

In this regard, both leaders have set out to create a plan for decarbonizing their respective territories, with an emphasis on encouraging electric transportation as well as the use of green hydrogen as a fuel.

“It is crucial to building this sort of synergy between autonomous communities,” Vice President Yllanes said after the meeting.

“With the start-up of the Lloseta green hydrogen plant, we will be able to generate 300 tons of green hydrogen per year, all of which will be produced entirely from photovoltaic plants, reducing CO2 emissions by up to 20,700 tons per year,” Yllanes assured, adding that “this is an enormous step forward in reducing emissions in transportation.”

“We know it’s an initiative that can be scaled up to help other communities. We also hope that Navarra would join this sort of program, which will have a positive influence on inhabitants’ health “he stated emphatically

Mikel Irujo, Minister of the Government of Navarra’s Department of Economic and Business Development, emphasized the “importance of interregional collaboration in the decarbonization process, in order to achieve sustainable results that produce social, economic, and environmental benefits, favoring technological and industrial positioning on the European stage.”

Minister Mikel Irujo also brought up the fact that “The Navarra Green Hydrogen Agenda serves as a strategic framework in Navarra. With a focus on 2030, goals are set for production, infrastructure, industry, transportation, and, of course, carbon reduction; and with the Ciudad Agroalimentaria de Tudela (CAT), a flagship project that combines public-private partnership “..

The green hydrogen production project at the Lloseta plant (Mallorca) was born in the abandoned Cemex cement factory and is part of the European initiative Green Hysland. It is the first Mediterranean initiative to get European money for its implementation. The European Union has allocated 10 million euros out of the over 50 million euros that the hydrogen plant has raised in total, with 3.75 million coming from the government.

Last December, the plant created the first green hydrogen molecules, and since then, it has continued to conduct tests in order to generate 300 tons of green hydrogen per year from solar panels when fully operational, reducing CO2 emissions by up to 21,000 tons per year.

The hydrogen generated by the Lloseta facility will be used as fuel for the EMT buses in Palma, among other things. It will also serve as a source of energy for public buildings and the Port of Palma, and it will be fed into the Redexis gas distribution system. As a result, it represents a step forward in the Balearic Islands’ decarbonization and progress toward the goals set forth in the Climate Change Law. Furthermore, Mallorca will serve as a renewable hydrogen center for all of southern Europe, serving as an example for other countries, particularly islands.

Verbund networks for “green hydrogen” in North and South