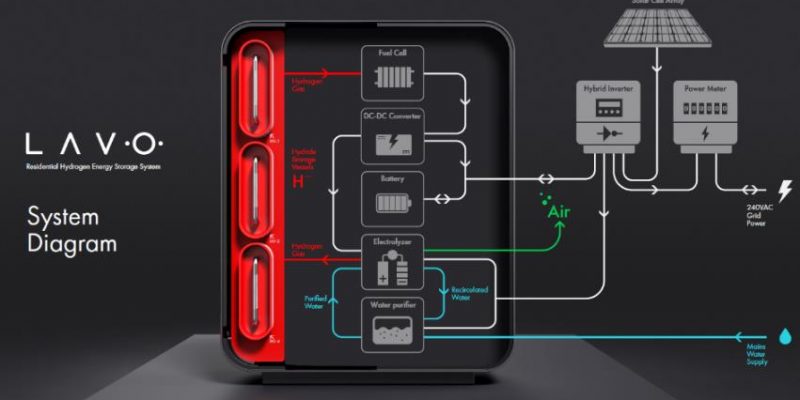 LAVO manufactures hydrogen energy batteries using a unique metal hydride process. The battery system functions as a solar sponge, interacting with solar arrays to collect and store renewable energy for later use. The machine makes hydrogen from water, stores it in LAVO’s unique metal hydride, and converts the hydrogen to energy.

Under the terms of the Agreement, Macarthur will be awarded between three and five patented LAVO 40 kWh hydrogen storage units for integration into remote worker lodging facilities planned for Ularring, near Lake Giles in Western Australia.

This might include the incorporation of larger, containerized ‘HEOS’ hydrogen energy batteries with a capacity of up to 13 MWh (currently being developed by LAVO), capable of commercially supplying electricity to Macarthur’s magnetite operations.

Alan Yu, CEO of LAVO commented: “Macarthur Mineral’s pursuit to de-carbonise mining and provide resources for green steel production is market leadership and an endeavor that LAVO is excited to be involved with. We are demonstrating our LAVO hydrogen hydride technology has practical, environmental and economically viable applications that extend from residential to significant mining projects. The LAVO | HEOS hydride platform aids in the transition to carbon neutrality across many sectors, integrating with existing infrastructure to support the heartland of industry in rural Australia. The potential for energy independence in the mining sector will reduce costly capital works and leverage the current transport gateways to drive profitable growth and improve environmental impacts.”

Andrew Bruton, CEO of Macarthur Minerals commented: “Macarthur is pleased to be partnering with LAVO on this ground-breaking initiative. Macarthur plans to roll-out integration of LAVO hydrogen storage units at Ularring to support intended early DSO hematite mining operations. This collaboration is also aimed at enabling Macarthur to achieve a clear carbon reduction strategy for its planned future magnetite operations at Moonshine, as it can allow for potential integration with magnetite processing on a modularised and gradual ‘scale-up’ basis over a target 5 to 10-year time horizon.

“The first stage of the agreement will allow Macarthur to work with LAVO in the early stages of project planning at Ularring for DSO, so that we can examine opportunities for the scale-up of an integrated hydrogen energy technology solution on site at Moonshine for the magnetite. By adopting this staged approach and becoming an “early follower”, rather than a “first adopter” Macarthur will have the opportunity to contain technology, capital and pricing risk so as to ensure that it achieves the lowest possible levelised cost of energy delivery for its magnetite processing. The partnership is also great news for an emerging Western Australian hydrogen industry.

“It has the potential to create an opportunity for a regional energy and logistics solution using hydride to help manage the problem of empty shipping containers moving between the region and ports. Switching to a rail or road-based Energy IN – Product OUT container approach, could be a huge story for the mineral resources sector in WA and the Goldfields region in particular.

“It’s another example of how going green can be profitable where there is a potential to exploit renewable energy assets far from the grid, and Macarthur is proud to be part of this emerging story as a company that is committed to the highest levels of ESG compliance.”

Three RWE hydrogen projects have been preselected for Europe-wide financing