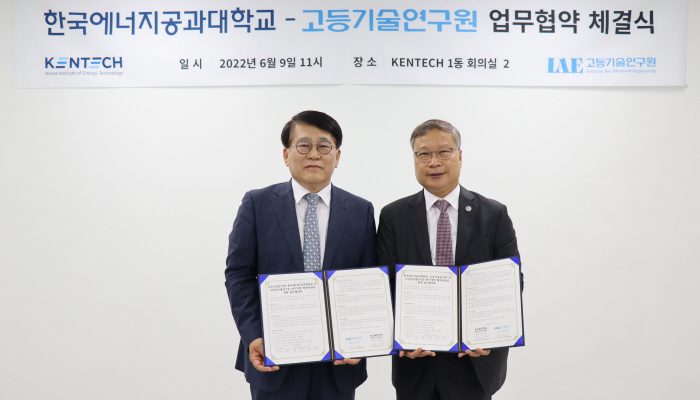 KENTECH and the Advanced Technology Research Institute will begin research and development in the field of green hydrogen and hydrogen consumption.

“It is more vital than ever to secure competitive green hydrogen generation and use technologies to achieve carbon neutrality,” said Kim Jin-gyun, director of the Advanced Technology Research Institute.

“Hydrogen energy is at the heart of the energy revolution, and it’s critical to keep investing and developing technologies,” he added. He predicted that the university will “lead the commercialization of hydrogen and be resurrected as an institution driving the energy paradigm revolution.”

GS Energy stated that it has signed an MOU with Korea Electric Power Corporation to collaborate on local and international eco-friendly energy projects.

Both firms plan to participate in the global energy industry. We’ll work together to create new and sustainable energy sources like solar and wind energy, as well as future energy businesses like green hydrogen and blue ammonia.

With a total capacity of 5.8 GW, the GS Group is Korea’s largest private power producing firm. We are seeking innovative and renewable energy as a future growth engine for both local and international industries. It now has ambitions to expand its solar power, wind power, and fuel cell operations to 1.2GW.

“The experience acquired by the private and governmental sectors in the energy business is a national asset,” said Kim Seong-won, CEO of GS Energy.

On the 27th of last month, this deal was signed at the Automotive Engineering Exposition 2022, which was hosted at the International Peace Conference Center in Yokohama, Japan. Hogreen Air CEO Hong Seong-ho and Intelligent Energy CCO Greg Harris were in attendance at the signing event.

Hogreen Air intends to obtain a location in Nam-gu, Gwangju’s urban high-tech industrial complex, begin building in August, and begin production in earnest in the first quarter of 2023.

“Hogreen Air, which began with a drone, used Intelligent Energy’s ‘IE-Solar’ hydrogen fuel cell to a drone to overcome the limits of short flight time and low payload,” a company official stated. “In the Gwangju Industrial Complex, I will construct an early step for the localization of hydrogen fuel cells,” he added.

Hogreen Air, a company that provides integrated solutions for hydrogen drones that include both software and hardware, is expanding its business beyond drones to include power generating systems for buildings, big power production systems of 20 MW (megawatt) or more, and mobility. is increasing in size In addition, the corporation is prepared to enter the liquid hydrogen market for its full-fledged hydrogen business.

“We have a closer relationship with Intelligent Energy as a result of this arrangement,” stated CEO Hong Seong-ho.

“We’ve been talking local manufacturing with important regional partners in the global hydrogen economy for the past few months,” said David Woolhouse, CEO of Intelligent Energy. “We’ve been working with Hog Green Air for four years, and we’re thrilled to announce the signing of a manufacturing contract in Korea as the first step toward worldwide IE production.” He continued, “We will continue to enhance the facility.”