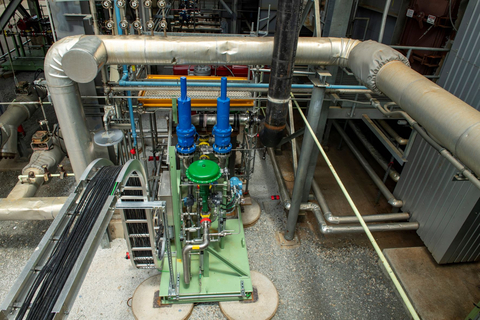 Companies successfully verified fuel blending of hydrogen and natural gas at both partial and full load on an M501G natural gas turbine. The demonstration project was the first in North America to verify 20%* hydrogen fuel blending on an advanced class gas turbine, and it was also the largest test of its kind to date, with the 20% mix reducing carbon emissions by around 7% compared to natural gas.

Georgia Power, Southern Company’s largest electric subsidiary, collaborated with Mitsubishi Power for the groundbreaking testing as part of a continued commitment to new research and development (R&D) to build the energy grid of the future and reduce carbon emissions across its generation fleet, with Georgia Power’s carbon emissions had already decreased by more than 60% since 2007.

The Plant McDonough-Atkinson complex, which is less than 10 miles from downtown Atlanta, has been serving electric consumers for over 80 years and was fully converted to natural gas in 2012, with the capacity to power up to 1.7 million households. It now runs six M501G series gas turbines, which are state-of-the-art and give great performance and efficiency, as well as three steam turbines in three blocks of 2-on-1 combined-cycle arrangement.

Mitsubishi Power used some results from a study commissioned by the New Energy and Industrial Technology Development Organization (NEDO), Japan’s national research and development agency, to complete hydrogen blending on one M501G gas turbine unit with an approximate output of 265 MW. Dry low NOx (DLN) hydrogen blending proved successful up to 20% at the planned 100% natural gas firing temperature, within emissions compliance for the current air permit, and with no effect on maintenance intervals. By testing up to 20% hydrogen at a minimum emissions-compliant load, the team was able to confirm better turndown.

Engineering, planning, hydrogen blending hardware, controls, commissioning, and risk management were all provided by Mitsubishi Power for this project. Centaurus and Mitsubishi Power collaborated to obtain and manage the hydrogen supply. Mitsubishi Power’s hydrogen combustion experience and continuing hydrogen combustion development for 100 percent hydrogen DLN combustion at its Takasago Works site in Hyogo Prefecture, Japan, are used in this project. The development, design, and construction of gas turbines, as well as demonstration and verification, are all covered on this site. The corporation has announced the development of a Takasago Hydrogen Park, which will begin in the first quarter of 2022. It will be the first certification facility for hydrogen-related technology in the world. With this full competence, the business is working toward commercializing highly dependable, carbon-free power generation technology and products, including tests and collaboration with partners across the world on a potential road to 100% hydrogen firing for small and large-frame gas turbines.

“This massive hydrogen demonstration project at Plant McDonough-Atkinson is another example of how Georgia Power and Southern Company are laying the groundwork for the energy future today.” This demonstration paves the path for existing infrastructure to be used in a clean and carbon-free manner in the long run. “By making these sensible investments today on behalf of our customers, we will be able to continue to supply clean, safe, dependable, and cheap electricity as Georgia develops and flourishes for decades to come,” said Allen Reaves, Georgia Power’s Senior Vice President and Senior Production Officer. “This type of research and development not only benefits our consumers in the long run, but it also serves to propel the whole energy sector toward a cleaner, carbon-free future.” We’re delighted to have played a part in it, and we’re excited by what we’ve been able to do with Mitsubishi Power Americas.”

The project’s technical consultant was Southern Company’s industry-leading R&D group. The team is doing research on low-carbon hydrogen power generation, production, distribution, transportation, infrastructure, and energy storage both at home and abroad. Southern Company is leading demonstrations with the US Department of Energy that encompass the whole value chain of a hydrogen economy and thinks that hydrogen technology has a strong chance of delivering a sustainable energy future.

The idea was developed with the help of the Electric Power Research Institute (EPRI), an independent, non-profit energy research and development organization. During the testing, EPRI researchers were on-site, and the organization will provide a complete report on the tests and outcomes later this summer. Through initiatives like this one, as well as programs like the Low-Carbon Resources Initiative, EPRI provides thought leadership and technical knowledge.