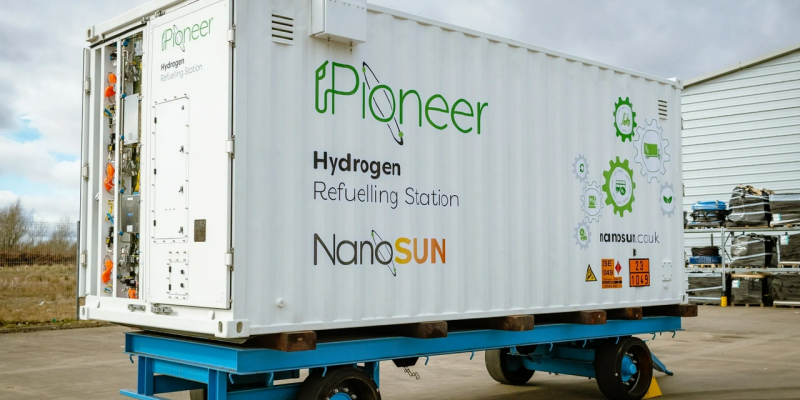 NanoSUN revealed that it had completed the Shell GameChanger program by safely and securely filling a hydrogen-powered vehicle’s tank with its mobile Pioneer Hydrogen Refueling Station (HRS).

NanoSUN was named the ‘best start-up’ company in the fourth edition of the New Energy Challenge 2019, resulting in Shell GameChanger providing crucial funding and support. Its idea of a low-cost, mobile HRS addressed a critical requirement if hydrogen is to become a popular transportation fuel. NanoSUN took on the task of building a mobile HRS capable of holding 350 kg of hydrogen and dispensing the gas into a hydrogen-powered vehicle to prove the idea.

NanoSUN was able to design, construct, and now run the Pioneer HRS thanks to its collaboration with Shell. The Pioneer HRS is a fully mobile, self-contained, and automated hydrogen refueling station. It provides a cost-effective method of transporting transportation-grade hydrogen to the point of use. Since no compressor is needed to dispense the gas, the capital cost is considerably lower than with a fixed HRS.

In an environment where lowering carbon emissions and cleaning tailpipe exhaust has become critical in the fight against climate change and pollution, hydrogen is rapidly gaining acceptance as a viable alternative to gasoline and diesel in the automotive industry.

Fuel-cell vehicles, such as buses, heavy-duty trucks, and vans, are quickly being adopted by commercial fleet owners because they can be refueled with hydrogen faster than their battery-equivalents can be charged with electricity. However, the refueling industry is struggling to meet the rising demand for hydrogen gas, necessitating the need for a fast, low-cost refueling solution for vehicle fleets. NanoSUN’s Pioneer HRS has now come forward to fulfill this critical requirement, thanks to Shell GameChanger’s help.

Hydrogen is best developed in big, centralised plants, according to NanoSUN, where complex chemical-engineering operations will benefit from economies of scale. The Pioneer HRS will then carry high-pressure hydrogen gas to the point of use, where it can be dispensed directly into fuel-cell vehicles.