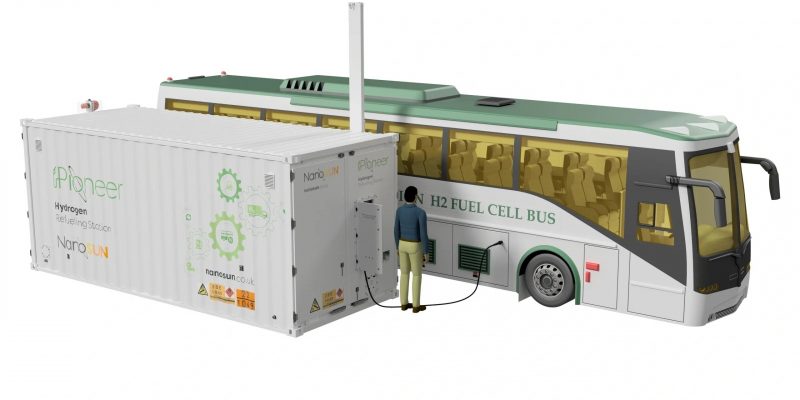 NanoSUN, a manufacturer of hydrogen delivery technologies headquartered in the United Kingdom, completed construction of the first pioneer hydrogen refueling station as it prepares to begin field trials around the country.

The mobile Pioneer Hydrogen Refueling Station from NanoSUN is recognized as an important component in a centralized hydrogen supply and local delivery model for developing a hydrogen fuel system for transportation. The Pioneer’s transportability, intrinsic durability, and low-cost offering make it the perfect option for in-field and handheld refueling, providing a critical stepping stone to facilitating the economic accelerated rollout of the hydrogen ecosystem.

Transport accounts for about one-third of all UK carbon dioxide emissions, with automobiles accounting for the vast majority of these emissions. Hydrogen is envisioned as a major component of the future transportation fuel mix, improving energy security, reducing oil dependence, greenhouse gas emissions, and air pollution. Hydrogen allows for a wide range of energy sources to be used and makes a significant contribution to climate change mitigation, especially when generated using renewable primary energy sources.

The automobile industry is currently producing hydrogen-powered vehicles such as cars, buses, trucks, and forklifts, but the refueling industry is falling behind. There are only 120 hydrogen refueling stations (HRS) in Europe, and current designs are expensive and time-consuming to construct. These obstacles are a significant impediment to the deployment of hydrogen fleets.

In NanoSUN’s vision for future vehicle hydrogen refueling, the complex chemical engineering operations required take place on a large scale in centralized hydrogen processing plants, where they are most effective. High pressure hydrogen fuel is then dispensed directly into hydrogen vehicles after being filled into Pioneer Hydrogen Refueling Stations. More, simpler, and less expensive.

The first Pioneer has now rolled off the assembly line and is ready for its initial deployment. Following efficient development, the large-scale hydrogen refueller received all of the necessary Type Approvals under the Transportable Pressure Equipment Directive (TPED) and the Accord Dangereux Routier (ADR) treaty, as well as effective commissioning.

The Pioneer HRS will be seen in a variety of deployments during 2021. It will show a fully optimized hydrogen packaging, shipping, and dispensing solution for a variety of end consumer transportation needs.

“Completing our first Pioneer marks an important milestone in the development of the Pioneer Hydrogen Refuelling Station. Our solution enables multiple hydrogen sources and multiple hydrogen users to establish and scale quickly, matching hydrogen demand and supply. We look forward to showing what the Pioneer can deliver and to the next step to scale the commercial applications.”

In the future, NanSUN’s mobile Pioneer Hydrogen Refueling Station tackles the problems associated with hydrogen refueling and aids in the acceptance of hydrogen as a primary substitute for fossil fuel. The Pioneer seems to be a critical step forward within the automotive sector in an environment where lowering greenhouse emissions from road transport and achieving a net-zero future is imperative.

SunHydrogen names Woosuk Kim as COO ﻿and board director