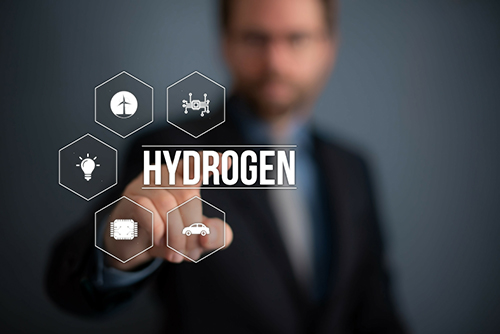 Through its research on hydrogen production, transportation, storage, and use, NETL is assisting the U.S. Department of Energy (DOE) in putting hydrogen at the forefront of efforts to achieve net-zero carbon emission goals in the power sector by 2035 and in the broader economy by 2050, while meeting the Hydrogen Shot goal of $1 per kilogram in a decade.

DOE models indicate the potential for at least a fivefold increase in the use of clean hydrogen if the Hydrogen Shot objectives are fulfilled. A U.S. industry estimate predicts a 16% reduction in carbon dioxide emissions by 2050, 140 billion dollars in earnings, and 700,000 jobs by 2030.

Hydrogen is an alternative fuel with an extremely high energy density. Hydrogen consists of only one proton and one electron and is a carrier of energy, not a source of energy. Hydrogen can store and provide useable energy. Hydrogen research at NETL encompasses a variety of areas related to efforts to put hydrogen to work to address the nation’s energy needs.

Hydrogen, when utilized in fuel cells, can be used to power buildings, automobiles, trucks, portable electronic gadgets, and backup power systems. Compared to traditional gasoline vehicles, fuel cell vehicles can reduce carbon dioxide (CO2) emissions by up to 50 percent if hydrogen is created from natural gas and by more than 90 percent if hydrogen is produced from renewable energy sources.

Additionally, only water is discharged from car tailpipes; no contaminants. In addition, because fuel cells are grid-independent, they are desirable for essential load services such as data centers, telecommunications towers, hospitals, emergency response systems, and even national defense applications including the military.

Partnerships with the Private Sector in Research

Through its financing of private sector research on advanced technological solutions, NETL undertakes research to make hydrogen a more accessible and effective fuel for electricity generation. For instance:

Hydrogen does not normally exist on its own in nature; it must be created from substances containing hydrogen. It is stored in vast quantities within water, hydrocarbons, and other organic stuff.

According to the Alternative Fuels Data Center of the Department of Energy, hydrogen can be generated from fossil fuels, biomass, and water electrolysis. Hydrogen’s environmental impact and energy efficiency depend on its production method and origin.

Current hydrogen generation relies on steam methane reforming, which is energy expensive and emits carbon dioxide. NETL is funding research into alternate methods of producing hydrogen, such as methane pyrolysis, which transforms methane straight into solid carbon and hydrogen gas.

The Laboratory has done an impartial analysis of the cost and performance of some hydrogen production units that use fossil fuels as their major feedstocks. The work also identified prospective avenues for performance enhancements and cost reductions, which are being evaluated in a forthcoming follow-up research.

According to Anderson, the Bipartisan Infrastructure Act includes $9.5 billion for hydrogen economy research, with $8 billion designated for hydrogen hubs.

Efforts to reduce global carbon dioxide emissions will increase reliance on renewable energy sources. The requirement for energy storage to compensate for fluctuating and occasionally intermittent production rates and ever-increasing demand is one of the most fundamental barriers to implementing this transformation. Utilizing excess renewable energy and water to make hydrogen via electrolysis, which may subsequently be used to produce energy on demand without releasing CO2, is an intriguing approach.

NETL has conducted significant study on hydrogen storage concerns. Storage is frequently cited as a barrier or impediment to broad hydrogen utilization. While there has been much talk regarding the need for storage linked with vehicles and refueling, there is also a requirement to store huge quantities of hydrogen for later usage in a secure manner. To satisfy future energy needs, NETL researchers are investigating the viability and difficulties of subsurface geologic storage of hydrogen.

Hydrogen promotion now also to be found in KEA-BW database