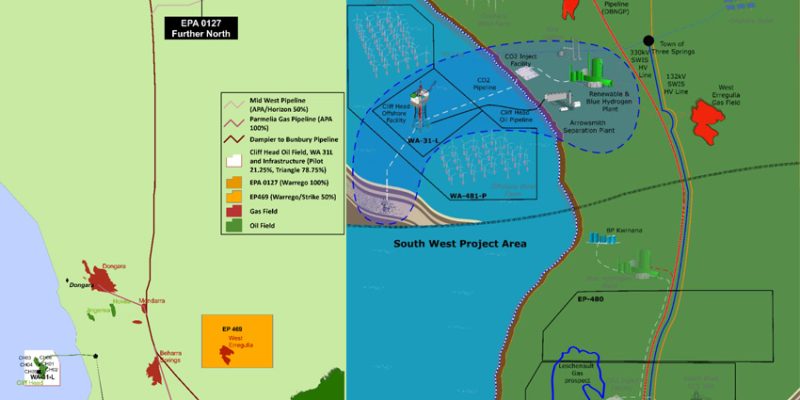 The Feasibility Study is forecast to complete in the first quarter of CY2022. Blue Hydrogen projects require expertise and collaboration from across the energy industry.

Pilot has established the Consortium, which represents the key components of a Blue
Hydrogen project:

The Consortium will participate in and jointly fund the Feasibility Study with a focus on the Blue Hydrogen technology, regional CCS potential, hydrogen markets, project infrastructure and commercialisation. Pilot will undertake a standalone assessment of the Cliff Head project’s CCS potential to provide the Feasibility Study with the necessary assumptions regarding the potential CO2 injection rate and CO2 storage capacity.

Pilot has previously completed a pre-feasibility screening of the CCS potential of the Cliff Head Oil Field with RISC Advisory which indicated that the Cliff Head Oil Field could provide carbon geosequestration of approximately 500,000 tonnes per annum of CO2 for a period 13-years at an injection cost of approximately $16/tonne of CO2, utilising the existing Cliff Head Oil Field onshore and offshore infrastructure and be fully operational by 2025. The Consortium arrangements set out a process for further joint participation in progressing towards project development following completion of the Feasibility Study.

Pilot’s Executive Chairman, Brad Lingo noted that “the Consortium represents an exciting evolution of Pilot’s business plan with the participation of key Australian energy industry participants supporting Pilot’s feasibility studies and vision for the Mid West Blue Hydrogen project. Pilot looks forward to working with the Consortium and subject to the Feasibility Study, progressing towards the development stage and ultimate delivery low cost and meaningful volumes of clean hydrogen into the Mid West region as part of Western Australia’s energy transition.”

As a diversified energy company, Pilot plans to leverage its existing oil and gas assets together with established energy industry infrastructure to become a leading developer of competitive clean energy projects in Western Australia. The Feasibility Study is designed to assess blue hydrogen and CCS projects that can integrate with existing assets and infrastructure to deliver competitive clean energy.

The objective of the Mid West Blue Hydrogen and CCS study is to assess the carbon capture, storage and use potential of the Cliff Head oil project and additional reservoirs across the broader Perth Basin, the production of blue hydrogen and commercialisation via the provision of CO2 management services and sale of hydrogen. Two leading international feasibility contractors have been engaged to assist with the Feasibility Study and further external assistance may be required to complete the study.

Genesis has been engaged to project manage the Feasibility Study and prepare the overall study report in conjunction with the Consortium and the other feasibility consultants. In addition, the Consortium will be leveraging Technip Energies’ significant hydrogen industry experience to complete an assessment of blue hydrogen production technologies and hydrogen markets.

RISC has been engaged to conduct the assessment of the infrastructure and CCS reservoirs (Cliff Head and other reservoirs across Perth Basin) associated with the proposed carbon management services and CCS activities. The team at RISC has a long history with the Cliff Head asset through involvement in the initial development through to a recent Cliff Head oil reserves/resources audit for Triangle Energy (Global) Limited and Pilot. The Feasibility Study will be conducted over a 6-month period. Key outcomes of the study will include detailed description and assessment of development projects, levelised cost of hydrogen and CO2 management services.