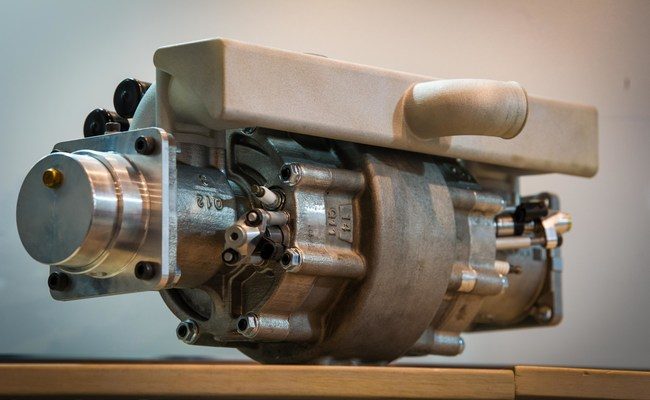 The Aquarius Free-Piston-Linear-Engine which now operates 100% on Hydrogen, without the need for fuel cells. Credit: David Katz

Aquarius Engines has developed a new hydrogen engine that could eliminate the need for both hydrogen fuel cells and fossil fuels.

The tiny 10kg machine uses the same technology as their original patented single-piston-linear-engine but only runs on hydrogen. As governments around the world prepare to phase out fossil fuels, Aquarius Engines has successfully tested a hydrogen-powered alternative to the traditional combustion engine.

The lightweight design and unique internal-gas-exchange method of the new Aquarius Hydrogen Engine would significantly reduce emissions and reduce the global carbon footprint.

Aquarius Engines did not reveal the new hydrogen engine until third-party tests were completed successfully by the world-renowned Austrian engineering firm AVL-Schrick. The tests showed that a modified version of the original Aquarius Engine can run entirely on Hydrogen.

The original Aquarius Engines Generator is currently being field tested in North America, Europe, Asia, and Australasia with great success. Aquarius Engines recently announced partnership agreements with Nokia in the fields of remote communication and energy equipment management, as well as the establishment of a subsidiary in Tokyo and collaboration with Japanese auto-parts manufacturers TPR and Honda-affiliated Musashi Seimitsu.

The 10kg Aquarius Engine, which was invented in 2014, is intended to be used as an onboard power generator in a vehicle or as a stand-alone electricity generator. In contrast to most conventional engines, which have hundreds of parts, the Aquarius Engine has only twenty components and one moving part. When compared to traditional engines, the lightweight, streamlined design makes it inexpensive and highly efficient, with little need for maintenance.

“It was always our dream at Aquarius Engines to breathe oxygen into hydrogen technology as the fuel of the future. From initial tests it appears that our hydrogen engine, that doesn’t require costly hydrogen fuel-cells, could be the affordable, green and sustainable answer to the challenges faced by global transport and remote energy production. As the world moves away from fossil fuel, our new hydrogen engine could spark the dawning of the age of Aquarius.” Said Gal Fridman, Chairman of Aquarius Engines.

Pathway to net-zero emissions by 2050 is narrow, according to IEA special report