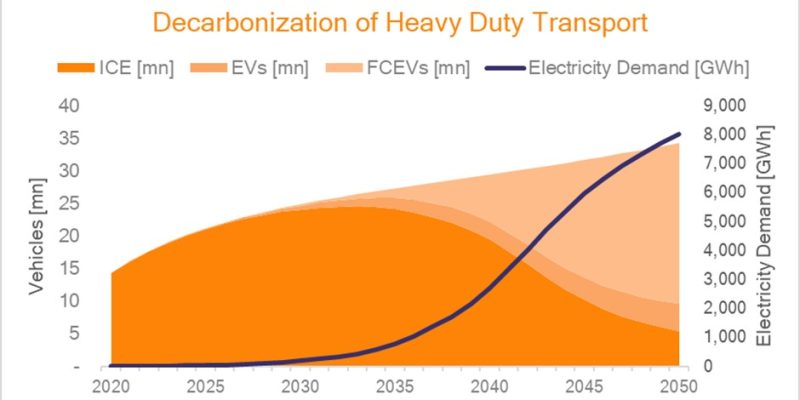 The global race to zero emissions provides the world two options for decarbonization, and it is evident that the decision has already been taken in favor of battery electric vehicles among passenger vehicles.

Nevertheless, despite the many dissenting voices and lingering challenges, the hydrogen fuel cell is destined to dominate heavy-duty long-distance haulage, ship transportation, and air travel.

It is a guarantee that the recent spike in oil prices, caused by a shortage of Russian oil, will be short-lived. Soon, there will be too much oil chasing too few buyers, and the price of oil will plummet – as early as 2027, according to our estimates – as most new vehicles stop using it.

Hydrogen’s trip begins with public transportation (trains and buses), heavy-duty haulage, shipping, and aviation, as each of these industries must find a route with zero emissions.

Compared to passenger vehicles, the larger a vehicle is and the longer it must operate continuously, the more advantageous hydrogen becomes. Citroen, Peugeot, and Vauxhall are all planning to deliver fuel cell van versions in 2022, with Japan, South Korea, and Europe having the highest penetration rates.

13.1 percent of sales of light commercial vehicles (LCVs) will feature a fuel cell by 2035, rising to 29.7 percent by 2050. In 2050, there will be a total of 38.7 million fuel cell LCVs on the road, representing about 22 percent of the entire worldwide fleet. However, this market will still be dominated by battery electric vehicles, with 88.9 million EV models in operation, accounting for almost 65 percent of sales. From 134 million in 2021 to barely 49 million in 2050, the overall number of ICE LCVs will decrease.

Scaling batteries to give sufficient power and range for these larger vehicles presents considerable logistical issues, and is often impossible. Emerging hydrogen and e-fuel technologies – which offer already-accepted refueling times and range capabilities – will be required, but they will require support and subsidies on their early path to market, as well as the establishment of a broader infrastructure for widespread acceptance.

Between the two decarbonization processes, heavy-duty trucks will demand 8,000 GWh of power annually on a global scale by 2050. (see graph). And while battery electric trucks will have a two- to three-year head start, hydrogen capacity will quickly surpass this at the market’s highest end.

Even in the passenger vehicle market, there will be buyers who require high usage rates and quick refills, and they are more likely to choose hydrogen over battery electric vehicles. This will be most prevalent in cities where a hydrogen infrastructure has begun to develop, with taxis representing a primary business opportunity. We anticipate that by 2050, FCEVs will account for 3.1% of all on-road cars, increasing from 40,000 vehicles in use now to 54.2 million. Insignificant in comparison to BEVs, yet worthy of attention.

“The light commercial vehicle space will be a battlefield where the two styles of zero emissions – battery and hydrogen – will meet”, says Harry Morgan, Rethink Energy’s Hydrogen Analyst and lead author of the report, “but still it is likely to show a preference towards battery-electric, with a similar market structure to the passenger vehicle segment”.

Hydrogen can only play a significant role when high usage rates and short, infrequent recharging intervals are required.

“These technologies will be accelerated into the market rapidly over the coming decade, with global transport emissions set to fall to 35% of 2022 levels by 2050”, continues Morgan.

Due to the reliance on energy for the charging of batteries, creation of hydrogen, and manufacturing of e-fuels, the sector’s need for electricity will increase by a factor of 13 by 2035 and by a factor of 60 by 2050. The global demand across ALL transport sectors will reach 13,095 TWh, which is more than fifty percent of the current global power demand across ALL sectors. By 2050, the demand for renewable hydrogen would reach 72,5 million tons.

In aviation and shipping, which account for 2 percent of world emissions each, batteries will only be utilized in rare situations. Due to the difficulties of storing hydrogen, the world’s lightest gas, ammonia will be utilized as a hydrogen-carrier in the shipping industry, at least until technologies for storing liquid hydrogen at minus 250 degrees Celsius are developed.

The aviation industry will also keep a close eye on liquid hydrogen as it develops its own decarbonization techniques, with fuels synthesized from hydrogen and biofuels providing an alternative route through 2035, after which it will be constrained by crop competition for food to feed a growing global population.

Pipeline for green hydrogen starts up by 2025 in Sines