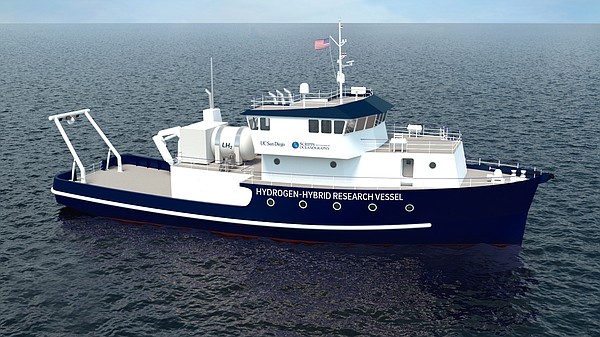 Oceanographers in San Diego are benefiting from California’s massive budget excess in an environmentally responsible way.

State officials have given the school $35 million to develop and run a hybrid-fueled ship that will rely on hydrogen fuel cells for the majority of its electricity.

The vessel also features diesel engines, which will be utilized solely on extended trips or as a backup fuel source if the hydrogen batteries run out.

The propulsion technology is regarded as a significant advancement for a maritime industry that is now dependent on climate-warming fossil fuels.

The new ship will replace the RV Gordon Sproul, a 40-year-old ship that is nearing the end of its operational life.

The diesel engines on that ship might burn up to 850 gallons of fuel every day.

The propulsion technology of the new research vessel is considered zero-emission.

As a result, the school will be able to meet its objective of becoming carbon neutral by 2035.

Atkins was instrumental in getting money for the craft approved by the state assembly.

The craft will be used to investigate the seas off the coast of California, according to UC San Diego officials.

The ship it is replacing took dozens of students on regular daytrip voyages and assisted in mapping the ocean floor off the coast of Long Beach, where hundreds of barrels of dangerous chemicals litter the sea floor.

The new vessel will be equipped with the most cutting-edge research technology, including as radar, fish imaging systems, and geological sampling devices.

The ship will also feature cutting-edge laboratories for interdisciplinary research.

The construction of the vessel is expected to take three years, according to Scripps authorities.

“We can use hydrogen for a ship this size,” said Bruce Appelgate, a Scripps Institution of Oceanography researcher. “A hydrogen that uses fuel cells where their only emissions are clean pure water, which our scientists need in laboratories and electricity and a little bit of heat.”

“Today is a good day for us. A good day,” said Toni Atkins, president pro tempore of the California State Senate. “Because we will continue to be setting the trend for others. Not just across our nation and California and up the coast and all the way past Oregon and Washington. But really as a global impact working together to make sure that our planet remains safe.”

“With 840 miles of coastline, it is important for California to manage its access to the vast resources of the Pacific Ocean,” said UC San Diego Chancellor Pradeep K. Khosla. “To do that, we need to better understand our coastal environments, and how climate change is affecting them. That’s where Scripps Institution of Oceanography can help. This new state-of-the-art research vessel will expand our capability to understand and protect our coastline and train UC San Diego undergraduate and graduate students through unparalleled hands-on learning.”