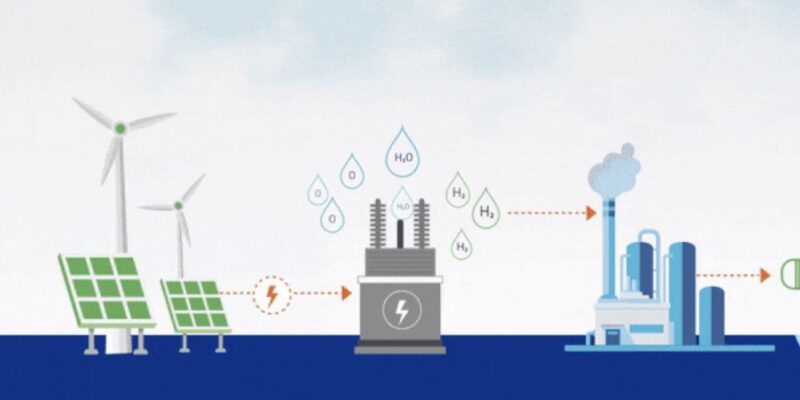 According to a press release issued by SOHAR on Tuesday, Jindal Shadeed, Hydrogen Rise, and Sohar Port and Freezone (SOHAR) have signed an agreement to evaluate the development of the first green hydrogen plant in Sohar, which will decarbonize the steel production process at Jindal Shadeed’s steel manufacturing plant.

The partners will analyze the possibility to make steel in an entirely sustainable manner in order to cut emissions, reduce the carbon footprint of the Jindal Shadeed complex, and conserve gas supplies for other uses across the country.

The first phase of the project will comprise the operation of a 35MW electrolyzer capacity combined with a solar renewable energy plant by mid-2024, following the completion of techno-economic feasibility studies. An upscaling path to a potential 350MW electrolysis capacity will be studied following this initial phase, according to the statement.

Because worldwide demand for decarbonized steel products is likely to rise dramatically in the future years, green steel manufacturing has the potential to deliver a considerable boost to Oman’s industries and economy.

Jindal Shadeed’s steel production expertise could help the company become an early pioneer in implementing innovative decarbonization technologies and substituting green hydrogen for natural gas in the steel manufacturing process, allowing it to become a major player in the rapidly growing global market for green steel.

“We are excited to work with Jindal Shadeed and SOHAR to evaluate the development of a step-wise scalable and bankable project for a very innovative decarbonization process – from a starting electrolysis size of 35MW to a step-by-step ten-fold scaling of 350MW,” said Olav Carlsen, CEO of Hydrogen Rise, Oman. This methodology, along with Oman’s low-cost renewable energy generation and dedication to decarbonization processes, would provide all partners a major competitive advantage in the rapidly growing worldwide market for green steel.”

“As we look at measures to decarbonize Oman’s sectors and reduce their reliance on gas, it is undeniably a step in the right direction.” This approach, if effective, may be used in industrial zones across the country and beyond the world,” he noted.

“The spectrum of goods that may be produced using this approach has the potential to revolutionize the steel sector in Oman,” Sanjay Anand, chief operating officer and head of Jindal Shadeed Iron & Steel in Oman, said. We are quite happy at Jindal Shadeed to take an environmentally friendly approach to steel production and to have some of the lowest carbon intensity footprints in the world. This opens up new markets for us and assures all of our consumers that our goods are not only of the greatest quality but also created sustainably with the community’s health in mind.”

“SOHAR is well-positioned to become a significant exporter of green steel around the world and lead the way in easing the production, transportation, and use of clean hydrogen,” said Mark Geilenkirchen, CEO of Sohar Port and Freezone. This agreement is the first key step toward building a viable gas alternative that will encourage sustainable practices in all SOHAR industries and attract new firms to our clusters. We’re excited to collaborate on this project with Jindal Shadeed and Hydrogen Rise, and to forge new ground in the shift to renewable energy.”

The International Energy Agency has recognized green hydrogen as one of the finest alternatives to gas for industry, assisting governments throughout the world in meeting environmental goals. The ability to construct a truly sustainable manufacturing technique for producing and exporting green steel has the potential to alter Oman’s economy and create entirely new businesses, both in metals and in the creation, storage, and export of hydrogen.

Worley has been hired by Green Energy Oman (GEO) to help with its low-carbon fuels project, which intends to transform 25GW of wind and solar energy into green hydrogen.

From the estimated 10-year project implementation term, a study will be conducted to find the potential to increase value. This offers possibilities for Omani citizens to work and grow, as well as Omani manufacturing opportunities across the supply chain. Worley will oversee the project from its Muscat office, with help from its European ‘Centers of Excellence.’

“With this initiative, Oman will be able to leverage its renewable energy capacity to manufacture green hydrogen and green ammonia for both domestic and export purposes.”

The GEO team, together with our technical professionals, are at the forefront of mega-scale green fuels project development, according to Najla Zuhair Al Jamali, CEO of Alternative Energy at OQ.

“The work being done will put Oman at the forefront of such initiatives, maximizing the use of Oman’s natural resources of wind and sun to create green fuels while also developing the country’s linked economy,” she added.

In order to create varied and sustainable economies, the GCC area, which is synonymous with oil and natural gas, is focusing on renewable energy sources.