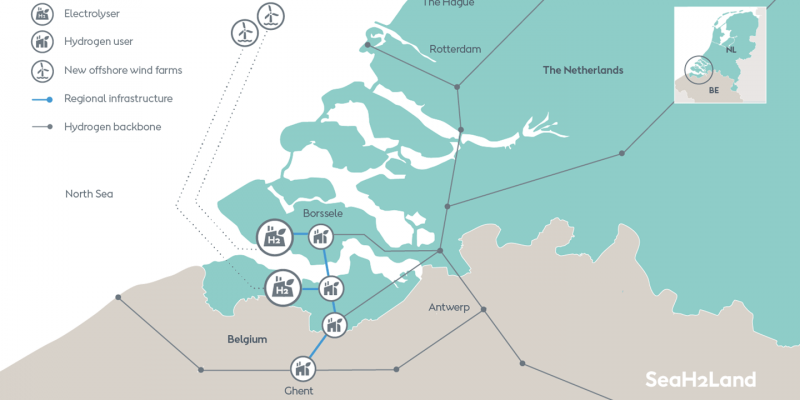 The green energy needed to generate renewable hydrogen is expected to come from the expansion of large-scale offshore wind. ArcelorMittal, Yara, Dow Benelux, and Zeeland Refinery, the region’s major industrial companies, support the construction of the necessary regional infrastructure to allow sustainably-produced steel, ammonia, ethylene, and fuels in the future, assisting the Netherlands and Belgium to accelerate their carbon reductions towards 2030 and beyond.

The SeaH2Land vision involves Ørsted developing a 1 GW green hydrogen production plant by 2030. If realized, the electrolyser that would generate renewable hydrogen will be able to turn about 20% of the region’s existing hydrogen usage to renewable hydrogen.

The North Sea Port cluster is one of Europe’s main production and demand hubs for fossil hydrogen, delivering 580,000 tonnes per year. Industrial demand in the cluster could reach 1,000,000 tonnes by 2050, equal to approximately 10 GW of electrolysis, owing to decarbonization efforts.

Ørsted suggests directly connecting the GW electrolyzer to a proposed 2 GW offshore wind farm in the Dutch North Sea. This will allow the large-scale supply of renewable energy needed for the development of renewable hydrogen, and it aligns with the Dutch government’s plans for an accelerated offshore wind roll-out in response to rising electricity demand. The offshore wind farm could be installed in one of the areas allocated for offshore wind production in the southern part of the Dutch exclusive economic zone.

The region’s industrial players, united in the Smart Delta Resources (SDR) business alliance, will continue to collaborate with TSOs to build a 45-kilometer regional open-access pipeline network extending through the North Sea Port area from Vlissingen-Oost (NL) to Gent (BE).

The GW electrolyzer is proposed to connect to the cluster’s planned regional pipeline grid, which will connect large-scale consumption and output. Yara, in partnership with Ørsted, and Zeeland Refinery have announced plans for mid-scale sustainable hydrogen production at their respective sites, while Dow has been exporting hydrogen to Yara since 2018 through the world’s first conversion of a gas pipeline into hydrogen.

The network can be expanded further south to ArcelorMittal as a short-term no-regrets solution and further north, under the river Scheldt, to Zeeland Refinery as a vital link to establish a special regional environment of hydrogen trade with substantial carbon reduction in the industrial processes of ammonia, chemicals, and steel, as well as a significant contribution to the European Green Contract.

Furthermore, the cluster plan suggests extending the 380 kV high-voltage network to satisfy the electrification needs of the industry south of the Scheldt River. This will allow for GW-scale electrolysis and offshore wind landing zones on both sides of the river, effectively transforming the cluster into a true energy center.

The regional network will allow the first phase of SeaH2Land, which includes 500 MW of electrolyzer power, subject to the establishment of a regulatory structure. The second step of SeaH2Land, which would increase the electrolyzer capability to 1 GW, will necessitate the need to link to a national hydrogen conduit, allowing for greater stability and storage.

A number of sites north and south of the Scheldt River have been reported for GW-scale electrolysis. Meanwhile, many projects are being built in the area on the sites of industrial players, such as Zeeland Refinery’s proposed 150 MW electrolyser, which will also be linked to the network.

The alliance will now move forward with consultations with regulatory authorities about the framework and policies required to promote the production of renewable hydrogen linked to large-scale offshore wind, regional infrastructure, and a full feasibility review of the project. This goal is consistent with the Hydrogen Delta Program for the region, which was created by Smart Delta Resources, a regional industrial organisation, which is funded by the provinces of Zeeland and Oost-Vlaanderen.

If all goes as expected, Ørsted, the world pioneer in offshore wind, will build the offshore wind farm and electrolyser. North Sea Port, which stretches from Zeeland (NL) to Flanders (BE), and Smart Delta Resources will lead the development of regional infrastructure in close partnership with TSOs, with funding from the provinces of Zeeland and Oost-Vlaanderen.

“The Dutch-Flemish North Sea Port covers one of the largest hydrogen clusters in Europe. As the world looks to decarbonise, it’s paramount that we act now to secure the long-term competitiveness of European industry in a green economy. The SeaH2Land project outlines a clear vision and roadmap for large-scale renewable hydrogen linked to new offshore wind capacity. With the right framework in place, the Netherlands and Belgium can leverage the nearly unlimited power of offshore wind to significantly advance renewable hydrogen as a true European industrial success story.”

“As one of the largest consumers of hydrogen, Yara welcomes visionary initiatives that can spur the development of a green hydrogen market in the Zeeland region.”

“ArcelorMittal Belgium maintains its leading role in the field of climate and the environment. We do this by focusing strongly on circularity, gradually replacing raw materials with resources based on waste streams and converting by-products into new raw materials. In addition, we also focus on using hydrogen, both in our existing processes and in novel technologies. Our ambition is to build a hydrogen pipeline between Dow in Terneuzen and ArcelorMittal in Ghent. We also aim to increase the use of green hydrogen, and for this our collaboration with Ørsted is an important step. Together with our partners in the Smart Delta Region, we will develop an ecosystem with a great complementarity of companies and knowledge centers.”

“Let us create together the critical mass to kickstart the H2 infrastructure, which is essential for the new H2 developments in the region.”

“SeaH2Land will help the Netherlands to accelerate its offshore wind build-out and to work towards its ambition of 3-4 GW electrolyser capacity by 2030. SeaH2Land offers the Netherlands and Belgium an opportunity to get closer to realising its 2030 climate goals by reducing carbon emissions in the industrial sector. Governments can help this flagship project by putting in place a dedicated support mechanism and renewable hydrogen programme coupled to offshore wind. This should support the necessary industrial scaling to bring down the cost of renewable hydrogen.”