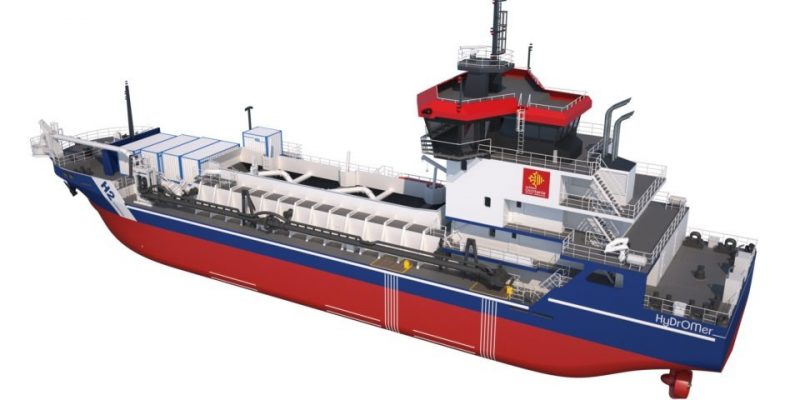 PIRIOU was recently notified in writing by the Occitanie Region of an order for the operation of a 70m suction dredger for the purpose of maintaining the Gulf of Lion’s ports.

This modern and high-performance dredge, designed in partnership with the Toulouse naval architectural firm LMG Marin, will have a transport capacity of 1,500 m3 of silt. Additionally, it will be fitted with a sling capable of transporting sand up to 32 meters deep and a front unloading gear for beach relining. By incorporating a hydrogen fuel cell, the ship’s diesel usage can be reduced by up to 20%.

Awarded after a year and a half of international competition, the market anticipates the dredge being delivered to Sète in the third quarter of 2023. Piriou has gained further success with the delivery of the Estuaire, Fromveur II, Breizh Nevez I, and the new order for the Insula Oya III, demonstrating its dynamism and competitiveness in this segment of public service vessels.

Vincent Faujour, President of the PIRIOU group declares: “With this new contract, we are happy to have won the confidence of a new region, that of Occitanie, for the construction of an innovative and complex vessel. , which must meet very demanding operating conditions and optimum comfort for its crew. The integration of a fuel cell, batteries and hydrogen storage containers on a dredge, is, beyond the environmental benefit, a technological challenge that we take up, as a player in the marine hydrogen sector. French. Due to its low environmental impact, this future dredge will participate in the energy transition initiated in the merchant marine sector .”

The dredge is fitted with a 500 mm diameter suction head and a 6000 m3 per hour pump powered by a variable speed electric motor. Its pumping capacity enables it to fill the well in under 20 minutes. The sediment is discharged from the ports by crashing through bottom-of-the-hull doors. Additionally, the dredger is outfitted with an extension line that extends to 32 meters in order to collect sand for coastal beach replenishment.

This is accomplished by attaching the dredge to a 500-meter-long or longer floating discharge pipe from the bow of the vessel. Equipment for maneuvers that is optimized The next dredge will be capable of performing exact rotations while transporting a maximum amount of material (50 percent more than the existing Cap Croisette dredge), necessitating an extremely detailed examination of the hull and propulsion.

The vessel is equipped with a trio of variable-speed electric thrusters – two 360-degree steerable thrusters at the stern and a high-power bow thruster – which together provide the vessel with the agility required for dredging. canals de port A ship that is both comfortable and stylish The crew quarters consist of ten independently sized, soundproof, air-conditioned cabins with an additional four people sleeping capacity.

Three levels of accommodation provide 360-degree views of the water and dredging equipment from the wheelhouse, which is raised and forward. The ship’s lines are simple, balancing elegance with the resilience and restrictions inherent in a work craft. The dredger will be painted in the Region’s livery, with an H2 symbol indicating the vessel’s hydrogen capacity. The dredger, which is powered by IMO 3 engines, complies with current environmental regulations.

At the wharf or at anchor, the ship can be fully powered by its fuel cell to reduce noise and environmental pollution. The available power will be sufficient to keep the crew on board in the absence of a generator. Whether at the dock or in operation, considerable attention has been devoted to decreasing noise pollution in the air and on the water.