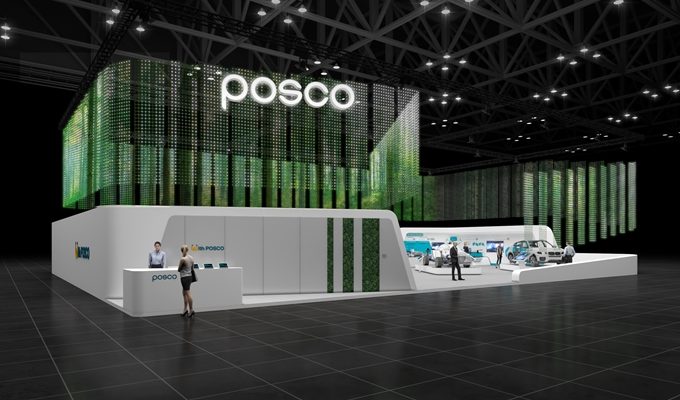 At the “2021 H2 Mobility+Energy Show” to be held at KINTEX, Ilsan, from September 8 to 11, POSCO Group is unveiling its hydrogen business concept.

There will be six separate businesses from the POSCO group that will all participate in this event: POSCO E&C, POSCO Energy, POSCO SPS, Research Institute of Industrial Science & Technology (RIST), POSCO International, and POSCO-owned POSCO Transportation and Logistics.

POSCO Group’s exhibit will occupy an area of 540 square meters and will showcase concepts of the company’s hydrogen business vision, steel manufacturing of hydrogen, hydrogen production, storage and distribution, and consumption of hydrogen.

First, a panoramic presentation and video are used to introduce POSCO Group’s hydrogen business goal at the entrance of the booth.

In each industry that the POSCO Group is involved in, such as hydrogen production, storage, delivery, and usage, the intro film at the entrance of the booth will serve as a blueprint for the firm.

It is a core technology, rather than a modification of the blast furnace method, that can make iron without carbon dioxide emission by employing hydrogen as a reducing agent rather than coal.

The POSCO Group’s business model for hydrogen production will also be demonstrated at the conference.

Over the next decade, by-product gas and LNG reforming of steel mills will produce 70,000 tons of gray hydrogen, which will collect and store carbon dioxide generated during the process of manufacturing 500,000 tons of blue hydrogen.

Concrete models and films will display the current status of this kind of business advertising.

The POSCO Group’s new hydrogen solutions will be revealed as well.

Visitors can interact with the equipment and experience first-hand what has to be done to improve hydrogen infrastructure, including hydrogen vehicle fuel tanks, liquid hydrogen storage tanks, and charging station storage tanks.

We will be showcasing several of the basic concepts of e-Autopos, POSCO’s integrated eco-friendly vehicle brand, on a larger scale.

Meanwhile, as the chairperson of the “Korea H2 Business Summit”, POSCO will serve as an advisory body for the country’s private firms with respect to hydrogen. Choi Jeong-Woo, Chairman of POSCO Group, will be at the Korea H2 Business Summit prior to the opening ceremony of the H2 Mobility+Energy Show to provide an update on the company’s hydrogen activities and to engage in discussions with council members.

Hynion and Hyrex to cooperate on hydrogen stations for leisure boats