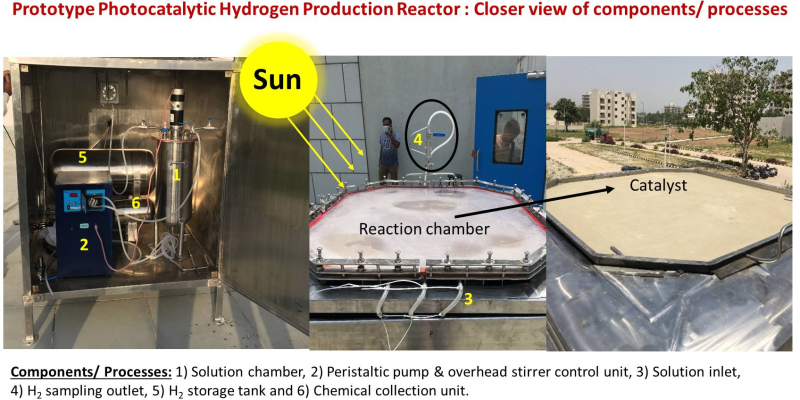 For the first time, a group of scientists has built a large-scale reactor that creates a significant quantity of hydrogen from renewable sources such as sunshine and water, in a cost-effective and long-term manner.

By 2030, India wants to have 450 GW of renewable energy. To accomplish this accomplishment, researchers all around the world are now working on renewable energy solutions that are both sustainable and have a low carbon impact. One of the most cost-effective methods to do so is to use photocatalytic water splitting to create hydrogen on a big scale. It is a low-cost economic process that will benefit society in the long run, as well as a long-term durable answer for the rising renewable energy demands. As a result, scientists must make substantial efforts to achieve this aim, which is an absolute necessity and an urgent need-of-the-hour.

Dr. Kamalakannan Kailasam and his team at the Institute of Nano Science and Technology (INST), Mohali, an autonomous institute of the Department of Science and Technology (DST), Government of India, have developed a prototype reactor that operates in natural sunlight to produce hydrogen (around 6.1 L in 8 hours). Carbon nitrides, a naturally occurring compound, was utilized as a catalyst in this experiment.

Many researchers have tried to replicate the process utilizing complicated metal oxide/nitride/sulphide based heterogeneous systems, but it was extremely difficult to do so in significant numbers. The INST team used a low-cost organic semiconductor in carbon nitrides, which can be easily made on a kilogram scale using cheaper precursors like urea and melamine. When sunlight shines on this semiconductor, it produces electrons and holes. The protons were reduced by electrons to form hydrogen, while holes were eaten by sacrificial agents, which are chemical agents that consume holes. The holes will recombine with the electrons if they are not consumed. The DST Nano Mission NATDP project is supporting this study, and a related article was just published in the ‘Journal of Cleaner Production,’ and the team is working on securing a patent for the invention.

For quite some time, the INST team has been working on photocatalytic water splitting to create hydrogen. “The energy crisis, as well as the looming climate catastrophe, compelled us to pursue this potential method of hydrogen generation via photocatalytic water splitting. Dr. Kamalakannan continued, “The stability and chemical flexibility of having various organic groups in carbon nitrides prompted us to work on these cost-effective organic semiconductor materials for sustainable hydrogen generation.”

The INST team developed the photocatalyst and hydrogen production using a large prototype reactor, starting with a lab-scale process and progressing to the bulk size. The photocatalyst was coated in the shape of panels that sustain water flow in the reactor, which is roughly 1 meter square. Hydrogen is produced when natural sunlight is irradiated, and it may be measured using gas chromatography. In order to hyphenate with the fuel cells, the team is optimizing hydrogen production with effective sunshine hours, as well as hydrogen purity, moisture traps, and gas separation membranes.

Hydrogen produced in this method may be utilized in a variety of ways, including generating energy in remote tribal regions using fuel cells, hydrogen stoves, and powering small electronic devices, to name a few. They will eventually be able to power transformers and electric cars, which are long-term research aims.

PowerCell makes it easier to switch to hydrogen-electric solutions