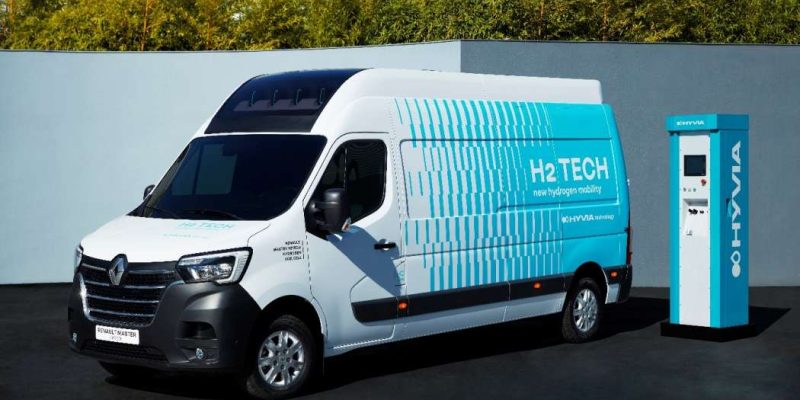 French automotive maker Renault has shown the first prototypes of its fuel cell transporter, which is being developed in collaboration with the fuel cell expert Plug Power as part of a joint venture with the company.

According to the company, the system will be demonstrated in a traditional 3.5-ton panel van with a 12 m3 loading space based on the Renault Master, which is expected to have a range of up to 500 kilometers when equipped with the system, with 100 kilometers being battery-electric. Overall, the company believes that clients with high load or speed needs, as well as those who want quick refilling and charging periods, will find fuel cells in light commercial vehicles to be useful. A compact and moderate 30 kW fuel cell and four H2 tanks with a capacity of 1.5 kg each are housed in the roof area of the vehicle, which is based on a battery-electric 3.1-ton Master E-Tech with a 57 kW electric motor, which is available as both a box and chassis, as well as a 33 kWh lithium-ion battery (3.7 kW AC charger).

In contrast to the Stellantis, this charges the battery as soon as the driving battery is depleted, allowing it to function as a range extender. When it comes to rolling phases, the French rival depends on a parallel fuel cell system from Symbio, which takes over propulsion straight from the battery-electric drive, which is responsible for starting and accelerating the vehicle. A tiny 10.5 kWh battery serves as interim storage for Stellantis, and it is also capable of being recharged outside. In the Hyvia van, the tanks are supplied by partner provider Faurecia, while the fuel cell is built by Plug Power in Flins, New Zealand. It is expected to enter the market in 2022, with more variants to follow, including a 19 cubic meter box truck with a range of 250 kilometers and a city bus with 15 seats and a range of 300 kilometers.

At the same time, the firm is demonstrating for the first time a prototype of an H2 fuel pump, which they want to make commercially available. Allow for a five-minute refilling period in the system’s programming. The hydrogen should either be generated in local electrolysers, which they want to sell as well, or supplied by tanker truck, according to the company. They will be offered for rent, lease, or purchase at the Flins facility as well as at other locations across the world. Hyvia, through a partnership with Renault and Plug Power, will be able to provide a comprehensive ecosystem for fuel cell propulsion and CO2-free transportation in professional fleets, according to David Holderbach, the company’s chief executive officer.