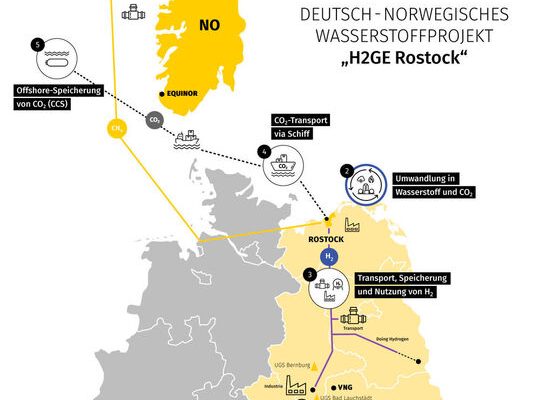 The German gas company VNG intends to construct and run a plant near Rostock with a planned capacity of 1.3 gigawatts that will have the ability to produce up to 230,000 tons of hydrogen annually, or roughly 20% of the country’s existing hydrogen market.

Production might begin in 2029 if a final decision is reached in 2025 or 2026 for the roughly one billion euro investment project. The unresolved difficulties will be clarified through a feasibility study.

Natural gas from Norway will be handled in Rostock with the Norwegian energy firm Equinor using already-existing pipes. Natural gas is separated into hydrogen and carbon dioxide in the technology being pursued by VNG and Equinor. The liquefied CO 2 will be pumped into the Norwegian seas’ seafloor by the two firms.

The German gas firm claims that in order to bridge and complement the rising supply of hydrogen from renewable sources, “a base load supply with substantial amounts of low-CO2 hydrogen is obtained.” Initially, the industries in eastern Germany should principally gain from this hydrogen. The feasibility study should answer this question since the usage of carbon dioxide in the industry is also being considered in addition to storing it in the seabed. According to VNG, CO 2 is utilized in tire manufacturing, as a coolant, and in fire extinguishing systems.

The race for green hydrogen