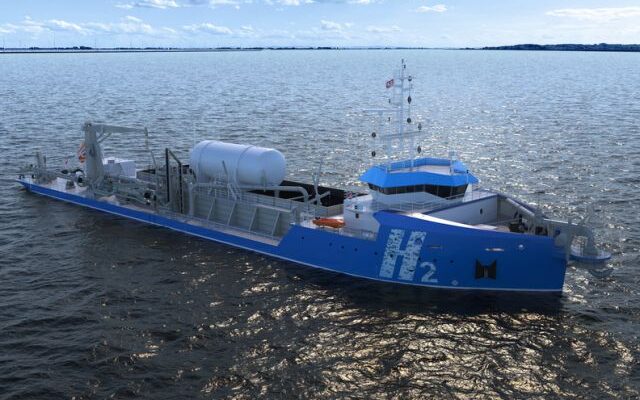 Royal IHC, a Dutch shipyard, has received Bureau Veritas’ ‘approval in principle’ (AiP) for the design of a hydrogen-fueled trailing suction hopper dredger.

Royal IHC is investigating a new form of vessel known as the LEAF (low energy adaptive fuel) hopper in collaboration with the Dutch government’s Ministry of Infrastructure and Water Management (Rijkswaterstaat).

The fuel type was chosen based on its capacity to reduce emissions, as well as the fuel’s availability and the readiness of the components, such as fuel cells and fuel storage. Following an investigation, hydrogen was discovered to be the greatest fit for a 2024 start date. The Rijkswaterstaat has established a goal of becoming carbon neutral by 2030. To do so, it looked for cost-effective solutions for its coastal protection projects that would result in considerable CO2 reductions by 2024.

The project’s next phase, according to Royal IHC’s Leonard den Boer, is to “create a partnership with dredger operator(s) and define conditions together with the Rijkswaterstaat.”

Before hydrogen was chosen as the preferred fuel for the dredger, other possibilities such as methanol and ammonia were examined as prospective zero-emission fuels for the dredger. The LEAF hopper’s exact capacity is currently being debated.

“The AiP from Bureau Veritas signifies that the intended design of the vessel, including all of its features and specifications, has been considered acceptable at this early stage and that the hydrogen system has been safely integrated,” Royal IHC stated in a statement.

According to the business, the LEAF hopper emits very little CO2, SOx, NOx, and particulate matter during construction, and it only emits water vapour when it operates, just like other hydrogen-fueled vessels. Many design characteristics on the LEAF hopper, such as an electric drive train and energy recovery systems, also contribute to low energy use.

In addition, Royal IHC and India’s Cochin Shipyard have signed a Memorandum of Understanding to collaborate on the construction of a trailing suction hopper dredger for the Dredging Corporation of India (DCI). The deal calls for the design and construction of a sophisticated hopper dredger with a capacity of 8,000m3 and/or 12,000m3 to address India’s growing demand for port maintenance and other dredging services. In India, such large vessels have never been built before.