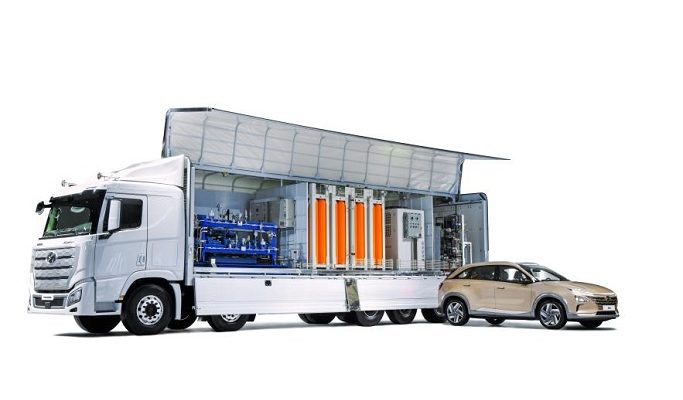 As they attempt to transition from carbon-intensive enterprises to a more sustainable model and seize new opportunities in the burgeoning energy sector, major South Korean companies are betting big on hydrogen across sectors.

As an alternative to fossil fuels, hydrogen can provide answers in domains ranging from transportation to energy storage, and it is a crucial pillar of the government’s aim to achieve net zero emissions by 2050 and grow renewable energy industries.

To join forces, the CEOs of ten corporations, including Hyundai Motor, SK, POSCO, Lotte, and Hanwha, established the Korea H2 Business Summit on Wednesday, which is the Korean equivalent of the Hydrogen Council, a global coalition of CEOs committed to accelerating the hydrogen energy transition.

Hyundai Motor Group, the world’s fifth-largest automaker, has committed 11.1 trillion won to its hydrogen business, citing its competence in creating car fuel cell systems, and has been expanding investment as part of its electrification push.

Hyundai Motor Co., the company’s flagship unit, announced that by 2028, it will apply the hydrogen fuel-cell system to all of its commercial vehicle models and expand its fuel cell electric vehicle (FCEV) range to three models, up from the single Nexo SUV.

A fuel cell electric vehicle (FCEV) is a low-emission vehicle that converts stored hydrogen into electricity to power the car’s motor.

The manufacturer wants to use hydrogen fuel-cell systems in a variety of places, including trains, ships, and urban air mobility (UAM), as well as people’s homes, buildings, and plants.

The third-largest conglomerate in the country, SK Group, has announced plans to invest 18.5 trillion won in hydrogen to create a hydrogen value chain using its energy infrastructure.

SK Holdings, the group’s holding company, has set an aim of 280,000 tons of hydrogen production per year by 2025 to supply gas stations and fuel cell power plants.

In a statement, SK said, “SK will use the group’s infrastructure to mass generate hydrogen and establish a comprehensive value chain ranging from production, logistics, and distribution.”

“The corporation will also invest in companies that have hydrogen technologies and form relationships with other industry players to target the global hydrogen market.”

SK E&S also stated that it will begin manufacturing 250,000 tons of “blue” hydrogen per year using imported natural gas in 2025, as well as developing “green” hydrogen technologies in the long run.

There are three methods for producing hydrogen at the moment. Grey hydrogen is made when the element is extracted from fossil fuels like coal, whereas blue hydrogen is made from natural gas and emits less CO2.

Green hydrogen is the cleanest type since it generates hydrogen from water using renewable energy.

POSCO, the world’s fifth-largest steelmaker by output, stated it wants to become a competitive low-carbon steel manufacturer by utilizing innovative technologies such as Carbon Capture, Utilization, and Storage (CCUS) and hydrogen-based steelmaking.

POSCO Chairman Choi Jeong-woo said at the H2 Mobility+Energy Show, a hydrogen industry event hosted in Ilsan, north of Seoul, that “we will revamp the steel production process by employing hydrogen, which does not emit CO2.”

Currently, the company produces 7,000 tons of hydrogen per year, largely from natural gas and waste from its power plants.

Lotte Chemical Co., a prominent South Korean petrochemical corporation, announced that by 2030, it will invest 4.4 trillion won in the hydrogen business to reduce carbon emissions and develop the new economic driver.

The Lotte Group’s petrochemical unit wants to develop a pilot plant to mass produce hydrogen storage tanks, a major component of FCEVs, as a first step.

Over the next decade, Lotte Chemical hopes to create 3 trillion won in yearly sales and 10% of its operational profits from the hydrogen business, according to the company.

The company also stated that it will produce approximately 600,000 tons of clean hydrogen utilizing its environmentally friendly manufacturing method, with the goal of capturing 30% of the domestic hydrogen market by 2030.

It wants to establish new hydrogen fuel cell power plants and hydrogen filling stations across the country by 2030 to enhance demand in various industrial areas.