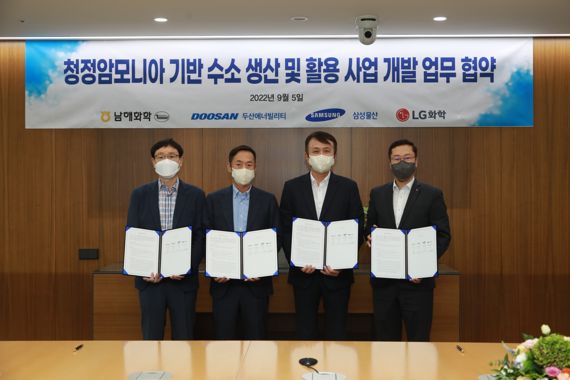 The trade division of Samsung C&T inked an MOU for the manufacture and use of clean ammonia-based hydrogen with Namhae Chemical, Doosan Energy, and LG Chem.

This agreement states that the four firms would work together to manufacture clean hydrogen overseas by bringing clean hydrogen produced abroad in the form of ammonia to Korea, repurposing it there, and determining if it can be utilized as a fuel to replace fossil fuels. The agreement was signed in order to cooperate along the entire hydrogen industry value chain, starting with a domestic introduction and use.

Based on this agreement, the four businesses intend to carefully assess the viability of the ammonia-based clean hydrogen business area and, in light of the findings, actualize the future business path.

Samsung C&T is in charge of creating an overall business model from the development of abroad clean hydrogen production projects to its introduction and use in Korea. This model is based on the trading company’s worldwide network and foreign commercial skills. According to a representative of Samsung C&T, “We will go forward with business development in accordance with the transition to the hydrogen economy based on diverse experiences and know-how accumulated from the energy resource trading company and the new and renewable energy operation industry.”

Through the use of supply infrastructure, such as ammonia storage tanks, Namhae Chemical assumes the responsibility of collaborating in the development of an ideal clean ammonia supply chain. Based on its strengths in power generation, Doosan Energy will acquire the technology to manufacture clean hydrogen by breaking down clean ammonia and work to construct an effective facility connected to the production of clean hydrogens, such as connecting turbines. LG Chem intends to work with others to commercialize clean hydrogen by creating catalysts and using the resulting clean hydrogen as fuel.