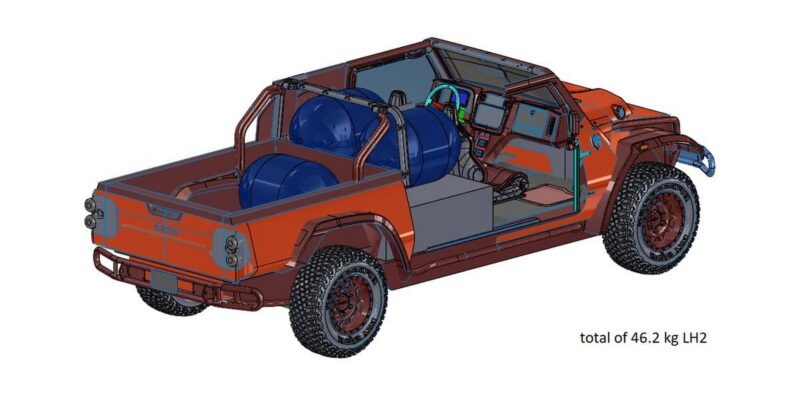 Because of its unusual name, the Scuderia Cameron Glickenhaus has established itself as one of the more outlandish figures on the automotive scene.

The majority of this is due to the company’s projects, which range from high-performance sports cars to hydrogen-powered Baja 1000 buggies.

Speaking of hydrogen fuel cells, it appears that the small carmaker has been concentrating its efforts on this technology lately. Scuderia Cameron Glickenhaus (SCG) is betting everything on hydrogen as the next environmentally friendly type of fuel, in contrast to the majority of the industry, which appears to believe batteries are the way forward.

Toyota and Honda, two long-time promoters of FCEVs (fuel cell electric vehicles), have recently changed their tune, and, while there are still a few other big names that aren’t abandoning the technology completely, it appears to have taken a backseat to the much more popular battery electric vehicles (BEVs).

In any case, SCG is not going down without a fight, and it has just unveiled plans for a fuel cell-powered pickup truck that is loosely based on the Boot model – the vehicle that was developed for the Baja 1000 competition – to demonstrate that. It’s true that at this point it’s nothing more than a collection of primarily red pixels, but James Glickenhaus, the company’s founder, says they hope to begin building the first prototype by the end of this year.

However, even if the SCG truck were to become a reality, it would most likely only sell in small quantities, leaving a large number of potential customers out in the cold. The announcement prompted a seemingly crazy idea from one Twitter user (sventastic99): “While you’re at it,” they wrote, “if you wouldn’t mind making a conversion kit so I can convert my Toyota Tacoma, both myself and approximately 500,000 other Toyota Tacoma owners would be most appreciative!”

They make it appear so simple, but the process of “pull, sell, and replace” is anything but straightforward. The installation of a replacement unit, even if SCG is able to manufacture it (though the unit would have to be brand/mode specific), is going to be a massive undertaking and far from “plug-and-play.” In addition to housing the motor (do you connect it to the old transmission or not? ), the fuel cells, and the high-pressure hydrogen tank, this is not the type of project you would want to begin your DIY career with, especially if you are just starting out.

SCG is essentially informing everyone of its capabilities, but it makes no indication that it intends to follow through on those abilities. In that case, we have no reason to doubt that it will be able to pull it off. Not because it would be insane, but because it is theoretically possible to do so

ARENA gets hydrogen under its roof

Tata Motors to invest in JLR