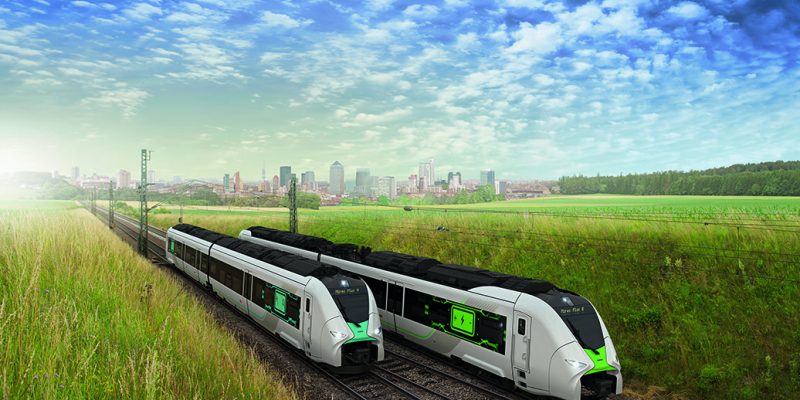 The European Green Deal is a strategy for making the EU’s economy more resilient.

Since the transportation sector currently accounts for around 25% of the Union’s greenhouse gas emissions, one of the main elements of the initiative is to roll out cleaner and healthier modes of transportation. By 2050, the European Green Deal aims to reduce transportation pollution by 90%.

Currently, half of Europe’s railway network is not electrified, and more than 800 diesel locomotives and trains operate on Romanian soil. Romania is now considering replacing some of them with cutting-edge hydrogen and/or electric-powered trains. In light of this, Siemens Mobility addressed environmental, technological, and financial aspects of a potential future acquisition with Ministry of Transportation participants.

Pure electric trains have the highest efficiency of up to 76 percent. Since the production, transportation, and storage of hydrogen consumes more energy, its efficiency is estimated to be about 30%. In both cases, using “green” resources to operate a train – such as wind, solar, or waterpower – is the best option.

The proper use-case must be studied before a decision regarding the operation of a hydrogen train or battery train on an unelectrified track can be made. Due to the relatively short distance of 19 km between these stations, Siemens Mobility recommends considering the use of a battery-powered train if a sustainable train link between Gara De Nord and the Henry Coanda Airport is to be created.

Siemens is a company based in Germany Battery-powered trains can be used in the same way as normal EMUs; the batteries can be charged in 15 minutes with the pantograph, and they can operate for up to 120 kilometers on batteries alone. The key advantages are that no external infrastructure, such as a hydrogen production and refueling station, is needed for the operation of battery-trains, and that such a train can be used in the same way as an EMU. As a result, capital costs would be lower than for a hydrogen train.