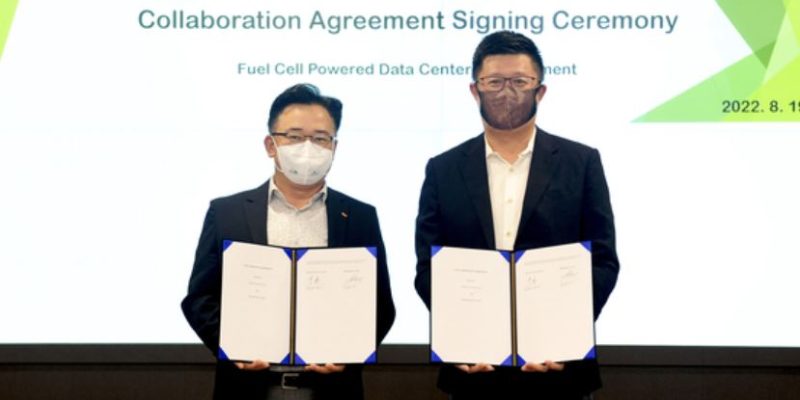 GDS, a Chinese data center operator with offices in Shanghai, will get fuel cells from SK ecoplant.

In an effort to get into the Southeast Asian market and build fuel cell-powered data centers there, the two businesses struck a cooperative agreement.

The installation and building of fuel cell-based power systems at data centers will be managed by SK ecoplant, which was rebranded from SK Engineering and Construction in May of last year. GDS will be in charge of running the data centers.

The largest data center developer and builder in China, GDS was founded in 2000 and is listed on the Nasdaq. It has over 20% of the market share. Chinese and international IT firms including Baidu, Alibaba, Tencent, Apple, Amazon, and Microsoft are among its clients.

The agreement’s objective, according to the parties, is to dominate the Southeast Asian data center industry by fusing the hydrogen fuel cell technology of the Korean constructor with those of GDS.

The commercial sector, including the data center and cold storage industries, is where SK ecoplant hopes to grow its fuel cell enterprises outside of the established power supply sector.

“I anticipate that the strategic partnership with GDS, the top data center provider in China, will serve as a platform for the fuel cell industry to expand across industries and countries,” said Park. Through ongoing business model development and collaboration with top-tier firms throughout the world, “We will continue to seize the lead in the global fuel cell industry.”

In the previous six years, SK eco plant has received contracts for 381 megawatts worth of fuel cell power plants and has been operating its fuel cell business since 2018. The business formed a partnership with Bloom Energy, a firm situated in San Jose, California, in 2020. In October 2020, the joint venture, known as Bloom SK Fuel Cell, established a production facility for solid oxide fuel cells in Gumi, North Gyeongsang. Bloom Energy owns 51 percent of the joint venture, which is 49 percent controlled by SK ecoplant.