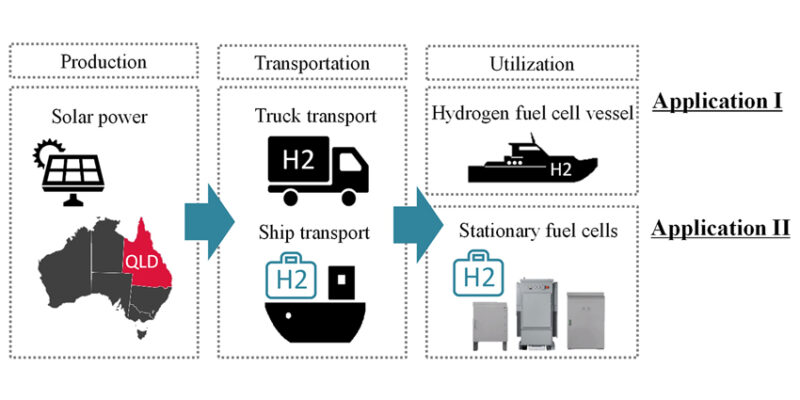 Renewable hydrogen produced in Australia is being transported to the Republic of Palau for use in fuel cells and hydrogen fuel cell vessels by Sojitz Corporation, CS Energy, and Nippon Engineering Consultants as part of a demonstration project.

Japan’s Ministry of the Environment selected Sojitz’s application for this green hydrogen project to receive subsidies under the ministry’s “Pilot Project for Comprehensive Support Throughout the Whole Hydrogen Supply Chain Abroad,” a financing program that is part of MOEJ’s Financing Programme for JCM Model Projects in FY2021. Over a three-year period, from FY2021 to FY2023, Sojitz and its partners plan to conduct this demonstration project.

Solar power is used to generate green hydrogen in Queensland, Australia, which will be shipped to Pacific Island countries for use in small fuel cells and hydrogen fuel vessels, with the goal of popularizing the use of hydrogen on islands. As the project representative, Sojitz will manage the project, conduct a field study in Palau, and assist with the implementation of equipment. A joint venture between CS Energy and Nippon Engineering Consultants will produce and supply green hydrogen, while Nippon will conduct a study of hydrogen applications and forecasted hydrogen demand in Pacific Island countries. Green hydrogen transportation by sea and the reduction of CO2 emissions are also going to be examined by Nippon Engineering Consultants. A subcontractor, Brother Industries, Ltd., will demonstrate fuel cell technology as part of the project’s demonstration.

Green hydrogen can be exported at a low cost thanks to a large land area and a high level of solar radiation at the Queensland hydrogen production site in Australia’s state of Queensland. That government, which supported this application and announced a hydrogen strategy in 2019, aims to support Queensland’s large-scale hydrogen industry in 2019. Queensland’s remote communities and islands may benefit from this collaborative project in terms of the development of a hydrogen-based society. Palau, which currently relies heavily on fossil fuels for its energy needs, will benefit greatly from the hydrogen produced as part of this project. Palau has set a goal of generating 45 percent of its energy from renewable sources by 2025 as part of its efforts to reduce greenhouse gas emissions.

A feasibility study will be carried out to determine whether Australia can supply hydrogen to Pacific Island countries for use in this hydrogen demonstration project. According to Palau’s and other Pacific Island countries’ specific needs, the research will look into hydrogen applications, forecast hydrogen demand, and calculate the effects of reducing CO2 emissions. In the event that hydrogen must be transported by sea, the study will also conduct a quantitative analysis of economic efficiency after project partners determine the best maritime route and best hydrogen carriers. A hydrogen supply chain that includes neighboring Pacific Island countries will be developed by Sojitz and its partners after the demonstration project concludes.

TECO 2030 and Gen2 Energy team up for green hydrogen