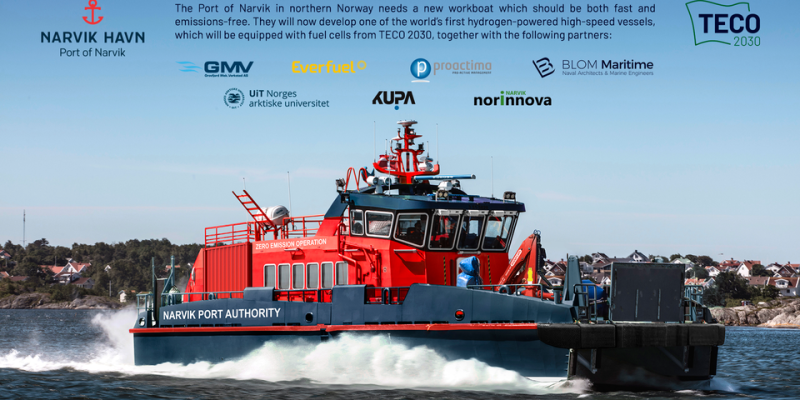 Narvik Port in northern Norway needs a new workboat that is both swift and emission-free.

They are currently seeking public funding to construct one of the world’s first hydrogen-powered high-speed vessels in collaboration with eight project partners.

From TECO 2030, the yacht will be equipped with hydrogen fuel cells and produced at the shipyard Grovfjord Mekaniske Verksted (GMV) near Narvik.

When built, the vessel will take the place of one of the port’s diesel-powered vessels. As a result, the Port of Narvik will be able to drastically reduce its diesel use and CO2 emissions.

“A new hydrogen-powered workboat will put the Port of Narvik in a unique position, where we will reduce our own emissions and use pioneering technology that will become important for both national and international shipping in the years to come,” says Børge Edvardsen Klingan, Port Director at the Port of Narvik.

“This project will contribute to economic growth and development in Narvik and its surrounding regions and will also be an important contribution to the green transition in the maritime industry. We are very happy that we are able to take the lead in reducing emissions from ships,” Klingan says.

The boat is scheduled for completion in 2023. The Port of Narvik will primarily utilize it to keep an eye on the port and its activities, to prepare for emergencies, and to teach and train crews.

The Port of Narvik hopes to have the boat designated as a long-range, high-speed passenger vessel, with a top speed of 23 knots.

The boat’s propulsion system will be manufactured at the TECO 2030 Innovation Center in Narvik, enabling it to operate emissions-free. The boat will be one of the first to be equipped with TECO 2030 fuel cells.

“Now we only need to get support for this project by the Norwegian state enterprise Enova. Everything else has already been prepared, and we are ready to get to work. Hydrogen will be key to reducing greenhouse gas emissions from the maritime industry, but the development of hydrogen technology for ships and other hydrogen infrastructure requires large resources,” says Enger.

“We hope that the Norwegian government will stand by their promise to promote the development of climate and environmentally friendly shipping, and that we will therefore receive support from Enova for this project,” he adds.

UiT in Narvik is a research partner in the project

TECO 2030 has entered into an agreement with UiT The Arctic University of Norway – which has a campus in Narvik – to collaborate on advancing hydrogen and fuel cell research and education in Norway.

As a result, UiT Narvik will engage in the project as a research partner in order to build competence in maritime hydrogen systems. This will enable them to give instruction that will prepare their pupils to be valuable future employees of the project’s partners.

Dissemination of knowledge will be a critical component of the project, and KUPA will focus on distributing knowledge about hydrogen boats generated during the boat’s construction and testing phase. KUPA is spearheading a Norwegian marine technology cluster and will share lessons acquired via the initiative with its members.

The hydrogen boat will serve as Narvik’s first hydrogen consumer and will require regular refueling. As a result, the project also includes the construction of a hydrogen filling station.

Everfuel intends to build this station. The company is actively striving to construct hydrogen filling stations around Norway for trucks, buses, and other heavy-duty vehicles.

Other port users will also be allowed to use the planned Narvik filling station. Each day, approximately 500 trucks pass through the city, and the filling station will thus not be limited to marine traffic.

The goal is for it to become the world’s first hydrogen filling station capable of serving both ships and road traffic, enabling more businesses and residents in the region to transition to climate-friendly hydrogen.

Everfuel will now collaborate with UiT and Norinnova Narvik to identify potential hydrogen users within the municipality and county municipality, including buses, garbage collection vehicles, and taxis.

TECO 2030 is developing hydrogen fuel cells in collaboration with AVL, an Austrian corporation specializing in powertrain technology. Hydrogen fuel cells are the engines of the future since they convert hydrogen to power with no emissions other than water vapour and warm air.

Ships and other heavy-duty applications powered by diesel engines or generators can transition to hydrogen and achieve zero greenhouse gas emissions by installing fuel cells.

Hydrogen fuel cells can also be used during port stays, loading and unloading, enabling zero-emission operation at berth without the need for a ship-to-shore power connection.

Norway wants to cut domestic shipping emissions by at least 50% by 2030, compared to 1990 levels. This goal should be attained through a greater emphasis on the development of low- and zero-emission solutions, as well as through the establishment of emission requirements for ships operating in Norwegian fjords.

Norway intends to include requirements for low- and zero-emission solutions in public tenders in order to accelerate the maritime industry’s green transition. These criteria will apply to new public tenders for ferry connections in 2023, and to high-speed vessels in 2025.

Additionally, beginning in 2026, only zero-emission cruise ships and ferries will be permitted to enter Norway’s world heritage fjords.

Ships sailing in Norwegian waters will thus need to lower their emissions and become more environmentally friendly, which TECO 2030 will assist them in doing.

TECO 2030 develops technology that enables ships to have a positive impact on the environment and climate. Along with hydrogen fuel cells, the company is developing carbon capture and exhaust gas cleaning technologies for the maritime industry, which will enable ships powered by fossil fuels to significantly lower their environmental and climate footprints.

EQTEC and Wood to collaborate on hydrogen market solutions