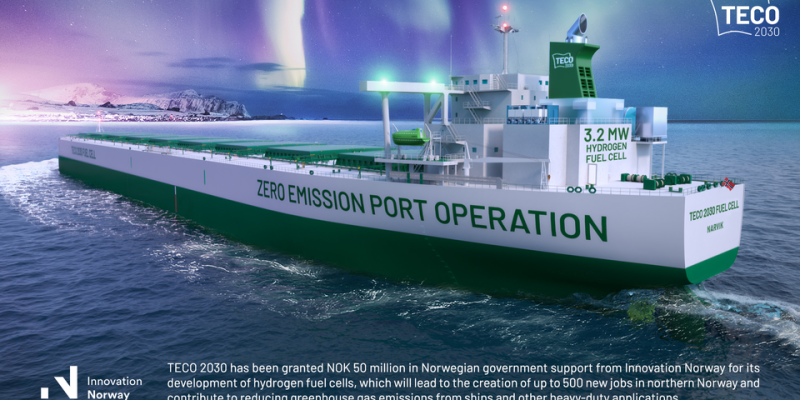 TECO 2030 has received NOK 50 million in Norwegian government assistance for its hydrogen fuel cell research, which would result in the creation of up to 500 new employment in northern Norway by 2030 and help to greenhouse gas reduction.

“What TECO 2030 is doing is pioneering work that has the potential to change shipping, cut emissions and create new jobs in northern Norway. This is inspiring work, and I wish TECO 2030 the best of luck with their exciting project,” says the Norwegian Minister of Trade and Industry, Jan Christian Vestre.

“I am convinced that many of the good and green solutions that will contribute to changing the world will come from Norwegian workplaces. That is why I find TECO 2030’s development project incredibly exciting,” says Vestre.

Innovation Norway has now awarded TECO 2030 the largest grant it has made to a single project this year.

The cash will be used to build and test the TECO 2030 Marine Fuel Cell, the world’s first fuel cell system purpose-built for use onboard ships and other heavy-duty applications.

“Our support to TECO 2030 is one of several contributions to the green transition in Norway,” says Håkon Haugli, Chief Executive Officer of Innovation Norway.

“At the same time, we see that their project could in the long run create a significant number of jobs in Narvik. Our task is to contribute to business development throughout Norway, and we believe that TECO 2030’s solutions have great potential, both in the Norwegian market, and internationally,” says Haugli.

“We are absolutely thrilled that Innovation Norway has decided to support our work on developing hydrogen fuel cells. This clearly shows that the Norwegian government believes in our technology and our plans, and we are very happy and grateful for that,” says Tore Enger, Chief Executive Officer of TECO 2030 ASA.

“With support from the Norwegian government, we will continue our work on developing fuel cells and establishing a factory in Narvik where these will be produced. This plant will contribute to economic growth and the creation of new, green jobs in northern Norway,” Enger says.

“The fuel cells we will produce here will help to reduce the environmental and climate impacts of ships and other heavy-duty applications and enable them to cut their emissions to zero,” he says.

To qualify for Innovation Norway’s support, TECO 2030 must raise approximately NOK 160 million in additional finance from other investors before the end of March 2023.

As revealed in September, TECO 2030 has already received up to NOK 5.4 million in indirect government funding in the form of tax deductions for developing the plant’s first semi-automated manufacturing line.

TECO 2030 anticipates investing up to NOK 1 billion in the plant over the next decade. During that time span, up to 500 new employment in development, pilot production, and full-scale production may be created in Narvik.

The capacity will be steadily increased over the next few years, with the goal of producing up to 1,200 MW of fuel cells annually by 2030, generating many billions of NOK in annual revenue.

Fuel cell development for application in the maritime industry is still in its infancy. TECO 2030 will consequently seek to collaborate with universities and research institutions in order to strengthen Norway’s capability in the manufacture of fuel cell systems.

TECO 2030 has entered into an agreement with UiT The Arctic University of Norway – which has a campus in Narvik – to collaborate on advancing hydrogen and fuel cell research and education in Norway.

As part of the arrangement, TECO 2030 will provide research communities with access to the TECO 2030 Innovation Center’s fuel cell element testing facilities during periods when they are not in use for production.

TECO 2030 is developing fuel cells in collaboration with AVL, an Austrian corporation specializing in powertrain technology. Hydrogen fuel cells are the engines of the future since they convert hydrogen to power with no emissions other than water vapour and warm air.

Ships and other heavy-duty applications powered by diesel engines or generators can transition to hydrogen and achieve zero greenhouse gas emissions by installing fuel cells.

Ships powered with hydrogen fuel cells can sail emissions-free for the entire route or for shorter distances, such as when entering and exiting ports.

Hydrogen fuel cells can also be used during port stays, loading and unloading, enabling zero-emission operation at berth without the need for a ship-to-shore power connection.

Hydrogen fuel cells provide a zero-emission solution for applications where batteries are insufficient. Batteries are bulky and heavy, have a limited range, and charge slowly. This is not feasible for all ships, and hence fuel cells may be a preferable option for many.

Fuel cells provide a greater range than batteries, are lighter, and take up less space. They are not rechargeable and can be refueled using hydrogen.

TECO 2030 intends to conduct pilot tests of its fuel cells on the Dutch shipowner Chemgas Shipping’s new hydrogen-powered tugboats and transport barges that will operate on the Danube, Europe’s second longest river. The initial delivery is anticipated for 2023.

Shipowners worldwide will consequently need to take action to make their vessels more climate-friendly, and TECO 2030 will assist them in doing so.

TECO 2030 develops technology that enables ships to have a positive impact on the environment and climate. Along with hydrogen fuel cells, the company is developing carbon capture and exhaust gas cleaning technologies for the maritime industry, which will enable ships powered by fossil fuels to significantly lower their environmental and climate footprints.