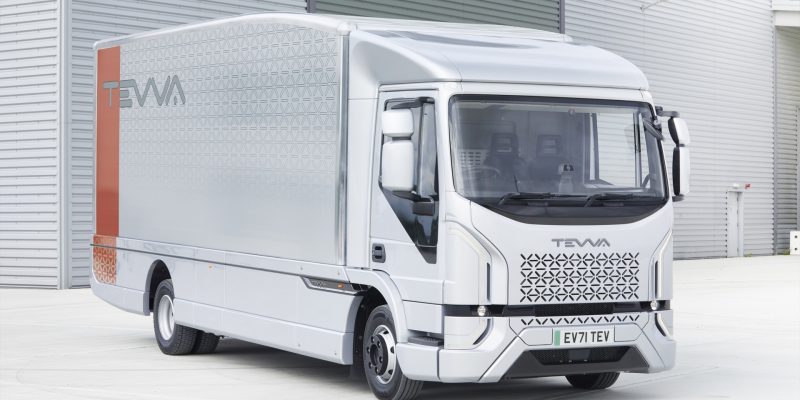 Tevva presented the new Tevva Vehicle, the first British-designed 7.5-tonne electric truck to be mass-produced in the UK. In 2020, the worldwide electric truck market was worth $1.15 billion, and by 2027, it is anticipated to be worth $14.19 billion.

The Tevva Truck was introduced to meet the current demand for electrification in the sector, with the UK and Europe committing to a net-zero emissions target by 2050 and a potential ban on the sale of all polluting cars by 2035.

The Tevva Truck has a range of up to 160 miles (250 kilometers) in pure battery electric vehicle (BEV) form and up to 310 miles (500 kilometers) with its patented range extender technology (REX), which has now been upgraded to use hydrogen fuel cells.

Tevva is dedicated to the continued development of revolutionary battery electric cars for the real world, helping to position Britain at the forefront of zero-emission commercial vehicle design and production. The Tevva Truck will be built at a brand-new facility in the London Thames Freeport region, near to central London and Europe, by a team directed by Ken Scott, previously Engineering Director at both Bentley and Alexander Dennis, and styled by Dale Grewer, former Chief Designer at Jaguar Land Rover.

The 11,000-square-foot production facility, which is slightly larger than an Olympic running track, is expected to provide 1,000 skilled mechanical, software, engineering, and manufacturing positions over the following 24 months, on top of the 60 jobs already established this year.

This is part of a larger project that has already seen tens of millions of pounds spent in the UK, with more investment on the way, to boost the economy and accelerate the country’s electric car revolution. By 2023, the plant is planned to produce 3,000 vehicles per year.

The Tevva Truck is designed to meet industry standards for dependability and maintenance. Fleet operators may benefit from a very dependable BEV engine combined with an extraordinarily robust and proven truck-derived chassis, as well as rapid access to low-cost components (be it inadvertently damaged and/or regular ‘wear and tear’) thanks to Tevva’s strong supplier connections. Tevva also provides help through a well-established countrywide roadside assistance network. Tevva provides technologies that have been tested in real-world, in-service settings.

“Technology is revolutionizing the commercial vehicle sector at a rapid rate, making it safer, greener, and totally more efficient,” said Asher Bennett, Founder and CEO of Tevva. However, real change is a slow process that must be undertaken one step at a time, even if several changes are required in a short period of time. For fleet managers, the Tevva Truck is a logical step into electrification, offering absolute peace of mind and a compelling total cost of ownership proposition, with no sacrifice on range or dependability and little compromise on payload.”

Tevva Truck will provide innovative range extension technology with its REX solution, which will be ready in 2023 for fleet managers worried about range. The Tevva Truck with integrated REX technology can now complete longer duty cycles and carry larger loads thanks to its small hydrogen fuel cells that replenish the battery while on the road.

Tevva is devoted to recruiting the next generation of drivers by changing the driving experience by designing a vehicle that is easier and more pleasurable to operate, allowing fleet owners to more easily attract drivers.

Future technological advancements, which are currently being tested, will allow the Tevva Truck to be fully charged in just one hour, allowing for double shift operations and lowering total cost of ownership, all while improving pedestrian safety, improving urban air quality, and making significant contributions to CO2 emissions reduction.

The Tevva Truck will play a vital part in helping the UK fulfill ambitious policy goals and establish a new competitive edge on the global arena by overcoming common hurdles to commercial electric vehicle adoption, such as price and range. By the end of 2030, it is anticipated to cut worldwide CO2 emissions by 10 million tonnes, the equivalent of removing one million automobiles off the road.