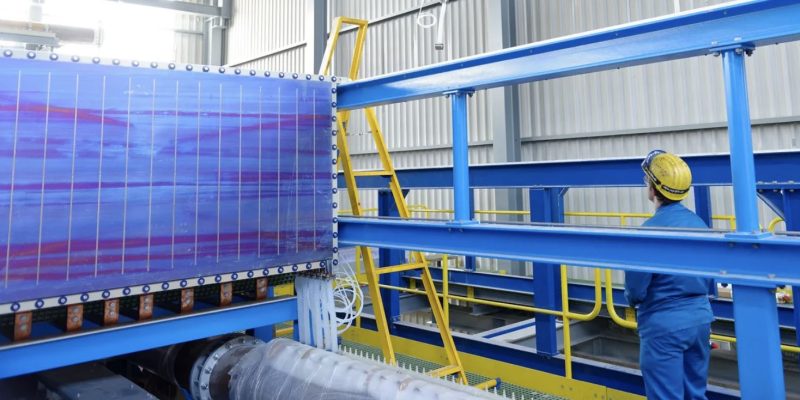 The German Federal Ministry of Education and Research (BMBF) is assisting the country’s entry into the hydrogen economy by providing financial assistance.

A leading German company, thyssenkrupp, is participating in all three hydrogen lead initiatives and is experimenting with the production, usage, and system integration of green hydrogen in the industrial sector. The company will thus continue to develop its technological leadership along the whole green chemicals value chain over the next four years, up to and including 2025, according to the company. Among these are the series manufacturing of large-scale water electrolyzers (H2Giga), the production of synthetic fuels, green ammonia, green methanol, and synthetic methane at sea (H2Mare), hydrogen transport and conversion technologies such as ammonia cracking, and the development of new hydrogen storage and transport technologies (TransHyDE). These flagship projects will bring together the expertise in hydrogen technologies in science, industry, and civil society from across Germany, igniting the flames of innovation for the development, conception, and implementation of hydrogen solutions on an industrial scale for the first time in the country.

In order to investigate and develop the large-scale manufacturing of alkaline water electrolysis, thyssenkrupp will get about 8.5 million euros in government funding (AWE). On the one hand, the goal is to take advantage of scaling effects and, as a result, to be able to lower the costs of production. A further extension of the existing supply chain of one gigawatt (GW) of electrolysis cells, on the other hand, will allow for the implementation of bigger project volumes, allowing for the implementation of many gigawatt projects at the same time each calendar year.

Martina Merz stresses the importance of this research endeavor, saying, “We have witnessed a major change in project sizes in recent months, from several hundred megawatts to gigawatts, indicating that large-scale and automated series manufacturing is already in line with market demand today.” When dealing with large orders of magnitude, straightforward upscaling is not an option; instead, disruptive techniques must be used, which are now being created, tested, and improved in discrete phases within the scope of this project,” says the researcher. In order to create the next technological generation of alkaline electrolysis, on the one hand, totally new stack and cell development work is being carried out in order to build a completely new stack and cell. Furthermore, we are attempting to put in place the supply chain optimization procedure that is necessary for industrial series manufacture of our products. Both the production and assembly processes are being streamlined as a result of the employment of robots and automation technology.

AWE is the focus of the H2Giga project “INSTALL AWE,” which is directed by thyssenkrupp and focuses on the industrialization of AWE, which is now the most advanced market-ready technology and is utilized mostly in large-scale industrial applications. It is also advantageous in terms of economics and climate protection to use the modular and standardized 20 MW module from thyssenkrupp in this configuration. While PEM electrolyzers are constructed in a compact manner, the single-element technology employed by AWE allows for selected maintenance work to be performed on individual cells rather than having to replace the entire stack. This helps to preserve resources while also lowering operational expenses. The fundamental connection with the Joint Venture partner Industrie De Nora, an internationally known specialist in electrochemistry and high-quality supplier for cell manufacture and coatings, is critical to this transition to series production. As a strong foundation for this next development phase, the completely integrated workflow between thyssenkrupp and De Nora, their established gigawatt supply chain for water electrolysis cells, as well as their global service workshops, serve as a strong foundation for this next development step. Thyssenkrupp will collaborate with long-standing partners such as De Nora and Hoedtke GmbH & Co. KG, as well as scientific partners, to achieve this goal, while also forging new partnerships. Investigations of broader research and development topics are being carried out in the H2Giga innovation pool, which is comprised of institutions, universities, and small specialized companies with scientific and technical skills relevant to the subject of series production. These investigations are also intended to further drive forward thyssenkrupp’s own development, which is part of the H2Giga initiative.

The H2Mare flagship project aims to develop the production of hydrogen and downstream products such as synthetic fuels, methanol, ammonia, and synthetic methane on the high seas, as well as the development of hydrogen storage facilities. The power-to-X procedures being developed by thyssenkrupp include all three of the aforementioned goods in one package. During the H2Mare “PtX-Wind” project, the firm will get funding of 780,000 euros to help with the development of the basics up to and including the engineering stage.

thyssenkrupp, a global leader in chemical plant engineering and construction, is able to provide a wide range of integrated green value chains based on its water electrolysis technology to customers. Processes for the manufacture of sustainable ammonia, methanol, and synthetic natural gas, for example, are among those under consideration (SNG). The firm may also provide its comprehensive understanding of process optimization, technological scale-up, modularization, and expertise gained from more than 2500 projects, among other things. It is necessary to evaluate all relevant research issues when evaluating the selected plant and process ideas. This includes everything from material assessments and operating modes to safety and environmental concepts.

In light of the fact that offshore wind turbines produce significantly greater quantities and more consistent power than their onshore counterparts, the direct generation of hydrogen and other power-to-X products has great potential, especially given that the CO2 and nitrogen required, in addition to water, can be extracted directly from the surrounding air. The generation of green ammonia in particular can be critical in this regard, as ammonia’s high energy density and easier storage technologies make it a more cost-effective alternative to hydrogen in some uses, such as ship fuel. If you live in a country with a high potential for hydrogen generation owing to a plentiful supply of solar and wind energy, such as Australia or Chile, green ammonia is a superior energy carrier than green hydrogen when it comes to exporting energy. Because ammonia is carried by ship, direct offshore generation by connecting wind turbines with electrolyzers would result in significant savings in transportation routes – and, consequently, in transportation costs. More importantly, the increased scale of offshore wind farms makes it feasible to produce bigger volumes of green ammonia, which in turn lowers selling costs and makes green ammonia a more competitive energy carrier.

As an affiliated partner in the third flagship project TransHyDE, thyssenkrupp is also exploring the possibilities of the ammonia cracking process. Particularly over long distances, the transportation of ammonia as a hydrogen carrier is more cost-effective and efficient. In addition to transportation of green ammonia and its conversion back into its constituents hydrogen and nitrogen at sites where hydrogen is required, the hydrogen generated in this manner can be used directly for other purposes. There are a variety of potential applications for this material, including the use of steel mills as a green feed for chemical plants and the use of fuel cells to turn the material into electrical energy. In light of Uhde’s extensive experience in the field of ammonia synthesis, the research into the binding of green hydrogen in ammonia for transportation and the subsequent release of the results demonstrates the innovative spirit and long-term viability of the established technology portfolio components.

The German Federal Ministry of Education and Research has provided funding for this project. In the hydrogen lead initiatives, more than 240 partners from research and industry are collaborating to achieve success. The initiatives were initiated in the spring of this year on the basis of non-binding financing prospects. The entire amount of money will be around 740 million euros in total.