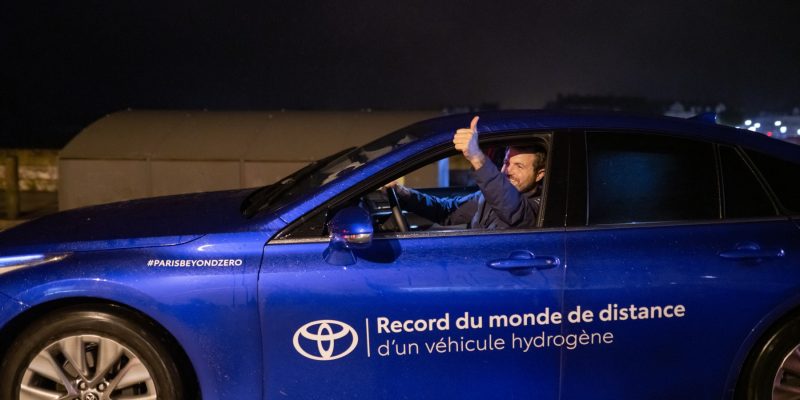 Toyota Mirai has achieved a new world record for the most distance traveled by a hydrogen-fueled vehicle in a single fill.

The trip began at 5:43 a.m. on Wednesday, May 26th, from the HYSETCO hydrogen station in Orly and concluded after driving 1003 kilometers on a single fill. The drive was completed on public roads south of Paris in the Loir-et-Cher and Indre-et-Loire regions, with the mileage and consumption verified by an independent body.

According to the manufacturer, green hydrogen was used during the effort and the average fuel consumption was 0.55 kg/100km, with Mirai having a hydrogen storage capacity of 5.6 kg. The Mirai thus surpasses the distance record set by the Hyundai Nexo, which traveled 887.5 kilometers between Melbourne and Broken Hill in Australia. The non-stop journey took 13 hours and 6 minutes at an average speed of 66.9 kilometers per hour.

Toyota’s new Mirai is the company’s second-generation fuel cell electric vehicle. Additionally, the improved efficiency of the fuel cell system, combined with increased hydrogen storage capacity and improved aerodynamics, contributes to an increase in driving range to approximately 650 kilometers under normal driving conditions, with a refueling time of less than five minutes at a 700 bar refueling station.