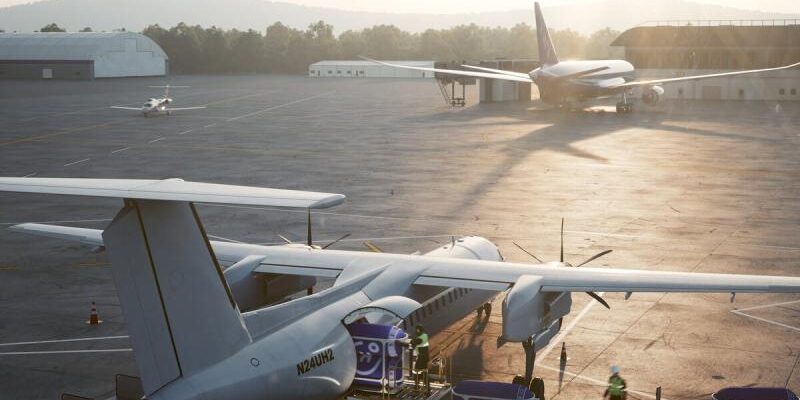 Universal Hydrogen, based in Los Angeles and directed by Paul Eremenko, a former chief technology officer and leading visionary for clean energy at both Airbus and United Technologies, is developing technology to convert mid-sized turboprop aircraft to hydrogen operation.

A bold new project there intends to convert small regional turboprop aircraft to hydrogen fuel, test and certify them for passenger transport, and perhaps provide a long-term answer to aviation’s carbon emissions by establishing that hydrogen aviation is economically viable.

AeroTEC of Seattle, MagniX of Everett, and Plug Power of New York, which operates a hydrogen fuel cell facility in Spokane, are partnering with Universal Hydrogen.

The first turboprop to be retrofitted is the De Havilland Canada DHC-8, most popularly referred as as the Dash 8.

The type that will be converted is not the larger model that Alaska Airlines now operates locally, but a smaller one that seats approximately 50 passengers.

The company intends to remove ten seats to fit the enormous hydrogen capsules that will serve as the plane’s fuel, lowering the plane’s capacity to roughly 40 passengers.

Later in the project’s life, the ATR 72 turboprop will undergo the similar alteration, with seating lowered to around 58 passengers following conversion.

The required technology is complicated and will require innovation.

Universal Hydrogen plans to establish a robust logistical infrastructure to transport twin packs of 7-foot-long, 3-foot-diameter hydrogen capsules to airports that can be quickly loaded and unloaded.

MagniX will construct the motors that will turn the propellers. It has already developed similar motors for prototype battery-powered electric airplanes.

Universal Hydrogen must incorporate all auxiliary equipment surrounding the fuel cell and electric motor, including the electronic control algorithms for the entire system, as well as compressors, humidifiers, and cooling systems for the fuel cell and motor.

Batteries will be included as a backup power source.

Meanwhile, AeroTEC’s engineers will need to alter the airframe — creating a new cargo door for loading the hydrogen capsules and mounting brackets for all of the equipment — and then guide the completed aircraft through the FAA certification procedure.