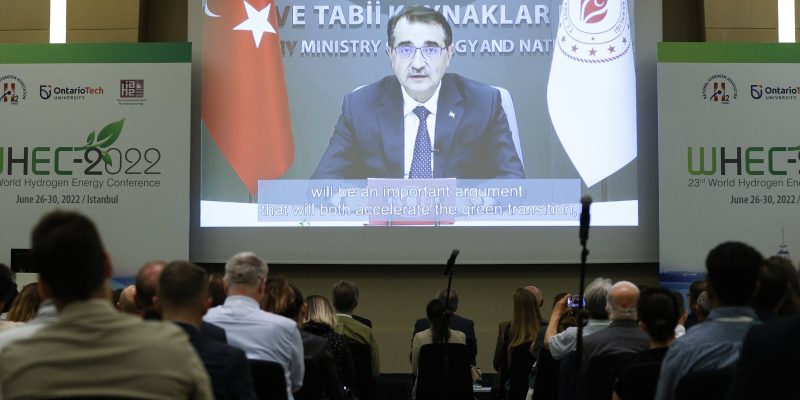 “Our strategy document, which consists of five headings and 50 actions, including hydrogen production, storage, distribution applications, and hydrogen use, will determine the direction of the steps we will take toward the creation of the hydrogen value chain,” the minister said.

Dönmez in a video message published at the opening of the 23rd World Hydrogen Energy Conference said that the ministry held a sector meeting with broad participation about the use of hydrogen technologies over two years ago.

Noting that the studies on hydrogen within the Turkish Energy, Nuclear, and Mining Research Institute are nearing their end, Dönmez said: “We have declared hydrogen as one of the priority areas due to its contribution to the sustainable energy future. We shared the vision of our ministry on this issue and took note of the demands coming from the sector.”

“Our aim is, without giving up on our economic development goals, building a carbon-neutral economy model,” he said.

Dönmez, pointing out that important steps have been taken in a wide spectrum in the fields of renewable energy, energy efficiency, and nuclear energy, said, “Now we want to take these steps one step further with hydrogen technologies.”

Stating that they will increase the share of production and use of renewable energy in Turkey, Dönmez noted that their aim is to “feed our existing natural gas lines with hydrogen.”

“We will produce hydrogen from renewable energy sources and coal. We will be in a position to export hydrogen to world markets,” the minister stressed.

Dönmez further noted that they are to encourage the use of boron as hydrogen storage and scavenger.

“Hydrogen, which will be among the energy sources of the future will accelerate the green transformation while reducing our energy imports and increasing our competitiveness,” he added.

Emphasizing that the development and dissemination of technology in this field is a critical target, Dönmez said, “With our research and development (R&D) activities to evaluate both our existing coal reserves and our renewable energy potential, we have determined that hydrogen can be both domestically consumed and there is the opportunity for it to be exported abroad.”

“There is a demand for renewable energy. Our R&D studies to switch to hydrogen by electrolysis of water in excess water storage and to produce hydrogen by the coal gasification method offer the opportunity to develop a domestic technology specific to this field,” Dönmez said.

He pointed out that by adding a certain amount of hydrogen to the existing natural gas lines, foreign dependency in this area will be reduced significantly.

The minister went on to say that works regarding the use of hydrogen in domestic installations and combustors in central Konya province was completed last year and important information was obtained as well.

“The development and commercialization of hydrogen technologies will also make significant contributions to the Turkish brand, which ensures self-sufficiency and develops globally competitive technologies,” he added.

NEOM will be the first to commercially produce green hydrogen