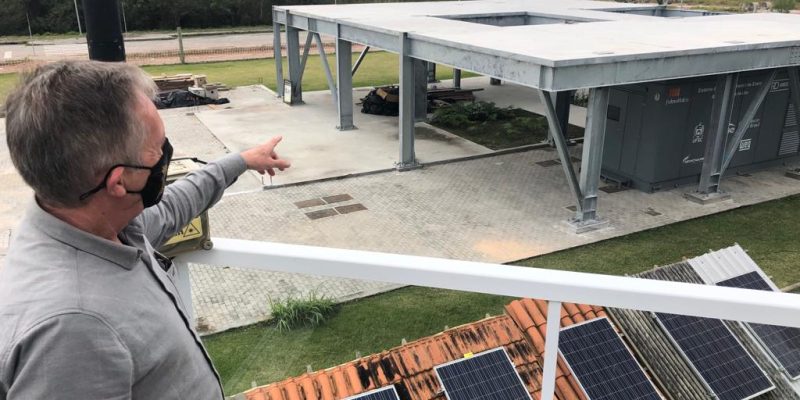 About 25 years ago, the production of solar energy appeared like a costly enterprise that was only possible in a few places.

The production and use of so-called green hydrogen, or H2V, is an innovation that is starting to take the world by storm. However, taking a look at this past today prompts Professor Ricardo Ruther, coordinator of the Photovoltaic Group at the Federal University of Santa Catarina, to project a promising future for this innovation.

UFSC starts to invest in research to foster an innovative mindset in the field in collaboration with Deutsche Gesellschaft für Internationale Zusammenarbeit, the German Technical Cooperation.

The analogy is not coincidental. The professor recalls how, before it became popular, solar generating had a high cost and was only considered a suitable energy source for remote systems far from metropolitan areas. Like any breakthrough, it took time to develop; funding for scientific initiatives that were frequently more expensive than the immediate savings they produced was necessary. The results of this approach are already evident in the widespread use of technology and the resulting low cost.

The long-term use of green hydrogen might resemble the learning curve associated with photovoltaic solar power production technologies. This topic, according to the professor, has been discussed at least since 2005, but environmental problems did not appear to be as important to an agenda at that time as they do now. Additionally, it is challenging to apply widely due to the production’s high cost.

The major nations of the globe have conducted research into hydrogen gas, which is referred to as “green” due to its sustainable manufacture by electrolysis using just water and renewable energy. The UFSC Strategic Research Group on Solar Energy (www.fotovoltaica.ufsc.br) immediately attracted the attention of partners because, according to the global consultancy Bloomberg New Energy Finance, photovoltaic solar power may provide low-cost green hydrogen.

The lecturer adds that green hydrogen is produced by electrolyzing water, which separates it from the oxygen in the molecule, using a sustainable source of energy. From utilizing it in a fuel cell to turning it back into energy to using it as fuel, hydrogen may be utilized for a multitude of purposes. For instance, hydrogen fuels all types of rockets. In reality, the sun or winds must have been the initial source of the energy used to generate the gas with the “green” seal.

The new UFSC laboratory facility, which is now under construction and will show the sector the viability and use of technology, will benefit from the German Cooperation investment. The relationship also includes training academics, researchers, and students as part of its objectives. For instance, Professor Ruther just completed training in Germany and returned with the necessary materials to launch the project.

The GIZ H2Brasil Project, which collaborates with the Ministry of Mines and Energy (MME) to expand the green hydrogen (H2V) market in the nation, includes this collaboration. The project supports the installation of plants and labs for the manufacture of sustainable fuel as well as the development of new technologies connected to H2V and its derivatives. It also supports the conducting of studies and research on the topic.

increased output
According to Ruther, a significant amount of solar energy output is required to ensure the synthesis of green hydrogen. A portion of this energy will come from the recently opened Solar Pilot Plant of Bifacial Modules, which was created through a collaboration between the Photovoltaic Laboratory and CTG Brasil, a multinational energy company, and is capable of producing energy using direct sunlight and ground reflection. The roof’s solar panel cover provides the other portion. According to Ruther, “We are doubling our solar producing capacity and using this additional solar generating power to make hydrogen.”

The Group’s laboratory at Sapiens Parque will invest a total of R$ 12 million in the production of green power, hydrogen, and ammonia. According to the prediction, the highest ammonia production capacity is 1 kg/h and the maximum generation potential is 4.1 Nm3/h (normal cubic meters per hour of green hydrogen). The amount of solar radiation and, consequently, the photovoltaic generation each day will determine the daily productivity.

In the world, there are 520 hydrogen plant projects, according to a survey by the Fapesp magazine. A photo voltaic-powered EDP plant will be used in addition to the project at UFSC and will be able to create 22.5 kilos (kg) of hydrogen per hour. A R$41.9 million investment is anticipated.

Additionally, the alliance proposes using a reactor to create green ammonia (NH3), a substance often used as fertilizer. This will be made feasible by the connection formed when solar-produced hydrogen reacts with nitrogen. The professor claims that the project will also get an electrolyzer and a fuel cell in addition to the reactor. The fuel cell uses the hydrogen that is produced by the electrolyzer in the electrolyzer to produce electricity.

Interest is focused on Brazil

Geopolitical concerns have made green hydrogen a popular choice for electricity production. This is due to the fact that, in addition to placing so much focus on environmental protection, European nations are reliant on Russian natural gas, which has a high price and a limited supply, factors that have led to higher expectations for the compound.

Ruther notes that Germany, which had previously chosen to shut down its nuclear reactors and search for alternatives to this energy, is the major force behind these investments in Europe. Additionally, an extremely dirty energy system that is dependent on coal must be replaced immediately. The economic issue is another alluring feature. Brazil was identified in the Bloomberg New Energy Finance report as the nation where the product would be sold for the lowest price globally in 2050.

According to Markus Francke, head of the German Cooperation’s H2Brasil Project, Brazil is extremely well-positioned to create green hydrogen at highly competitive rates due to its significant solar and wind resources. According to Francke, the present efforts have a great deal of potential to accelerate the process of enabling the full H2V value chain, from academic research and development organizations through the industrial and commercial sector to the final consumer of these clean technologies.

However, the solution does not simply take into account international interests. Since there are isolated systems using fossil fuel as a source in the region, causing environmental harm, using green hydrogen may directly affect the decarbonization of the Amazon in Brazil, for instance. Ruther notes that the proposal is to test everything, manufacture hydrogen from solar energy here, in our well-controlled environment, and further our understanding. The plan is to apply this expertise and understanding to the hundreds of mini-grids located across the Amazon region in order to satisfy local demand.

According to the professor, the majority of hydrogen generated today is referred to as gray hydrogen since it is derived from an unrenewable energy matrix. He contextualizes by saying, “Today, oil, natural gas, and coal account for 85% of the world’s energy consumption. These facts highlight how urgent it is to alter the course—a situation that the Photovoltaic Laboratory is already used to.

The high initial costs might be an immediate barrier, but he notes that this has also happened in the past when solar energy was thought to be a utopian solution for altering the energy grid. Initial ventures frequently fail to generate enough revenue to cover their costs because of the high expense of investing in equipment and human resources. But it is learning specifically that will drive down this cost. We invest in this technical development, he claims.

He believes that public investments are crucial to building the intellectual foundation for innovations that will eventually be affordable like solar panels are today. “This has already happened with solar energy, and there are reasons to believe that it will also happen with hydrogen. However, you require investment and public resources, he emphasizes.

Cooperation The Germany-Brazil Cooperation for Sustainable Development has been working on energy efficiency and renewable energy for many years. More recently, it has backed the development of the country’s institutional, technological, and legal frameworks for the growth of the green hydrogen (H2V) industry and its derivatives, including renewable fuels. Actions will be taken in the coming years to develop new technologies, foster the development and financing of innovative ideas and technological projects, studies, professional education, and training in the area of green hydrogen and its derivatives, with the support of the Ministry of Mines and Energy (MME) and the Ministry of Science, Technology, and Innovation (MCTI).

€165M for renewable hydrogen production plant in As Pontes