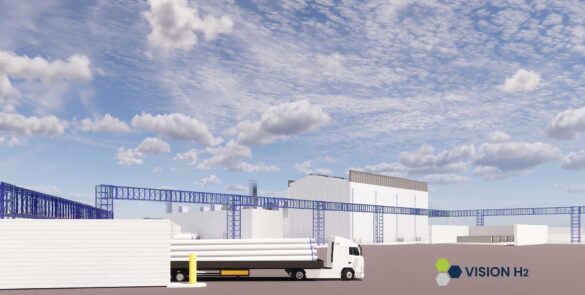 Permits for a 25 MW Green Hydrogen Plant in the Netherlands’ North Sea Port of Terneuzen have been given to Vision Hydrogen Corporation.

VoltH2, a subsidiary of Vision Hydrogen, has reached a significant developmental milestone in conjunction with Virya Energy toward the establishment of a 25 MW green hydrogen production facility with tube-trailer loading and integrated distribution. This scalable infrastructure enables the cooperation to increase the Site’s production capacity to 75 MW. The facility will generate up to 3.5 million kilograms of green hydrogen per year with a capacity of 25 MW and up to 10.5 million kilograms of hydrogen per year at a capacity of 75 MW.

The Project Site is strategically placed in the North Sea Port of Terneuzen, close to existing high-voltage power and gas infrastructure, as well as major renewable energy generation assets for the supply of green electrons and large industrial users for future clean hydrogen offtake.

The 150kV ground station of TenneT, the Netherlands’ national high voltage grid operator, is less than 1,500 metres from the Project Site, as is the connecting point to the Yara-Dow-Zeeland Refinery Pipeline, which may be repurposed for H2 delivery to the Zeeland Refinery in the future. The Ghent-Terneuzen Canal lies adjacent to the Project Site, providing water access to the large European port of Ghent.

The initial 25 MW electrolysis plant will be built by VisionH2 and Virya utilizing proven, commercially accessible technology. The initial phase of the project is expected to cost between €35 and €40 million in development expenditures.

Virya Energy, VisionH2’s partner, contributes its extensive experience and knowledge gained from the development and adaptation of previous green hydrogen applications. Virya Energy continues to be at the forefront of innovation in the development and adaptation of renewable and sustainable energy practices. The parties have obtained the necessary Environmental and Construction Permits and are now in the final statutory consultation and review stage.

Hydrogen energy is not an alternative to the climate crisis