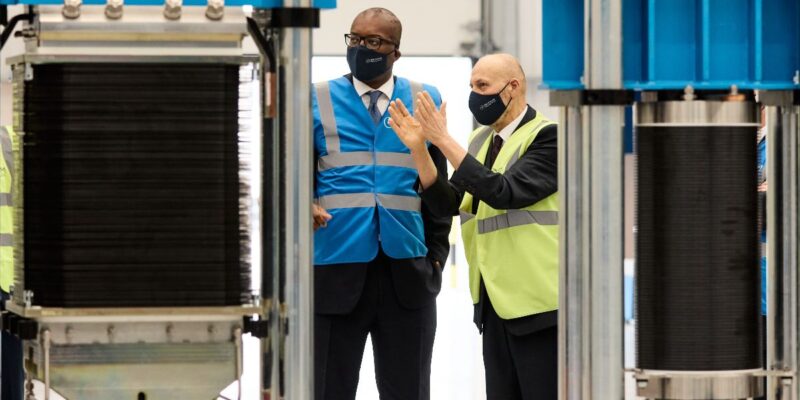 ITM Power has informed that the Rt Hon Kwasi Kwarteng, Secretary of State for Business, Energy, and the Environment launched the UK Government’s Hydrogen Strategy at an event to officially open ITM Power’s new factory in Sheffield’s Bessemer Park.

The ITM Power Gigafactory, which has a capacity of 1,000MW (1GW) of electrolysis equipment per year, began operations in January of this year. The plant presently employs approximately 320 people, with additional staffing planned as the facility ramps up to capacity. The company makes electrolyzers, which use renewable energy to separate water into its constituent molecules of hydrogen and oxygen. The resulting zero-carbon green hydrogen can subsequently be utilized to decarbonize industrial operations, transportation, and heating, and will play a significant role in the global fight to halt climate change.

“Hydrogen has the potential to provide a third of the UK’s energy in the future. Our first-ever Hydrogen Strategy sets out how we will back this technology, ramp up domestic production and create a new, British industry that will thrive over the next decade and beyond. ITM Power is at the forefront of manufacturing green hydrogen and its world-leading technologies are already playing an important role in cutting emissions as the UK moves away from fossil fuels, helping us meet our climate commitments, while creating thousands of high-quality jobs and unlocking billions-of-pounds of private investment.”

“We are delighted to have hosted Kwasi Kwarteng to launch the Government’s Hydrogen Strategy and to officially open the Bessemer Park Gigafactory. The Hydrogen Strategy will help British companies become world leaders in decarbonization technology and equipment. ITM Power is already at the forefront globally of equipment manufacturing to make green hydrogen – the only zero carbon footprint energy gas.”