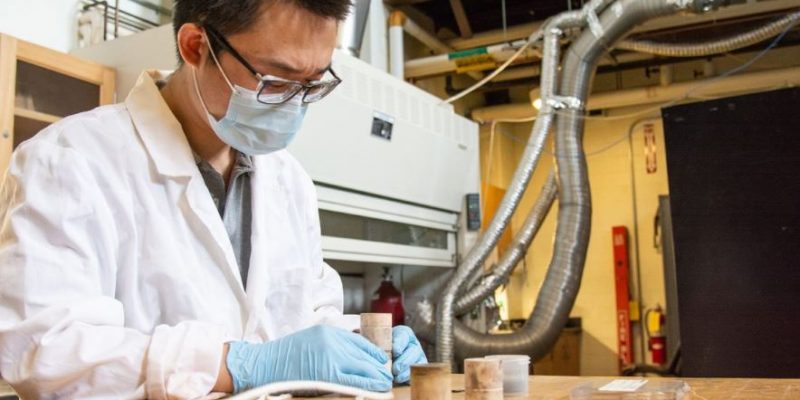 Researchers at West Virginia University are attempting to “greenify” hydrogen production in order to overcome the final barrier in linking renewable energy to the power grid.

Wenyuan Li, assistant professor of chemistry and biological engineering and the project’s primary investigator, stated, “We have a pretty rich source of renewables and a vast market for hydrogen, but the obstacle is that we can’t connect them.” “Our technology acts as a link between the two worlds. You convert electricity from renewable sources into hydrogen.”

The United States Department of Energy has awarded Li, Xingbo Liu, interim associate dean for research and professor of mechanical and aerospace engineering, and Edward Sabolsky, professor of mechanical and aerospace engineering in the Statler College, $1.2 million in funding to overcome the barriers associated with the production of green hydrogen as part of the DOE’s $16.5 million grant program.

“Green hydrogen” means that no carbon is emitted or a carbon footprint is left behind during the entire process of manufacturing hydrogen, according to Li. “This type of technology has a large market.”

The researchers will employ a solid oxide electrolysis cell, which splits water into hydrogen and oxygen using electricity to produce green, high purity hydrogen. The hydrogen can then be used in a variety of industrial applications, including sophisticated computer chip manufacture, solar cell manufacturing, metal refinement, and fertilizer synthesis.

Hydrogen can also be utilized as a cost-effective energy carrier to store huge amounts of excess energy from renewable sources like solar and wind, and to power fuel cells to create electricity for the power grid or other uses.

Solid oxide electrolysis and fuel cells, according to Li, are being investigated as ways to transform how the world is fueled. Lower energy bills, hydrogen-powered heavy-duty vehicles such as semi-trucks and ships, and improved environmental health are all possible outcomes.

“Hydrogen may be used to generate electricity or to power electric vehicles,” Li explained. “When you charge an electric vehicle, the energy comes from a fossil-fuel-fired power plant, which is costly and emits carbon dioxide. However, an electric vehicle powered by hydrogen produced by our technique is both environmentally friendly and cost effective.”

Interest in creating green hydrogen for industrial purposes has increased as the world moves toward a clean energy future. If effective, the new approach will manufacture hydrogen from water rather than fossil fuels, reducing industrial hydrogen’s carbon emissions.

Solid oxide electrolysis cells will eventually reach commercialization if the researchers can solve the barrier of the materials’ vulnerability to chromium toxicity. The presence of chromium causes the device to degrade quickly, making it unsuitable for long-term usage, according to Li.