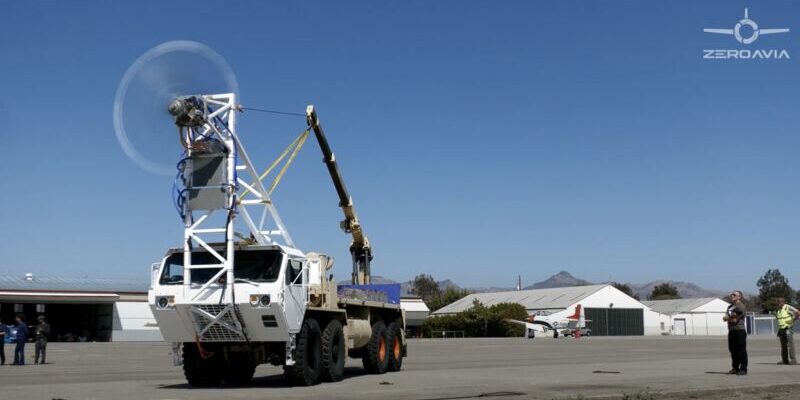 After announcing the commencement of the development of its 600 kW powertrain for use in 19-seat aircraft late last year, ZeroAvia has reached the first significant milestone for the HyFlyer II program.

The ground test, pictured below, utilized ZeroAvia’s 600kW flight-intent motor to tow the company’s new 15-ton HyperTruck mobile ground testing platform across the tarmac. The HyperTruck, based on heavy-duty military vehicles, is sized for the company’s ZA-2000 2MW+ powertrain, which can be used to test hydrogen-electric aircraft with 40-80 seats. The ground tests of the 600kW propulsion system help keep the company’s HyFlyer II program on schedule. The program’s goal is to produce a hydrogen-electric, zero-emission propulsion system for airframes with ten to twenty seats.

Val Miftakhov, CEO and founder of ZeroAvia, said: “These tests are important steps in reaching our next major goal of flight testing in our 19-seat aircraft in both the US and UK Do228-based prototypes. A hearty congratulations to our whole team, who have worked expertly and diligently developing this system.”

This is ZeroAvia’s first high-power run of the ZA-600, kicking off its flight-intent hardware qualification program. The first milestone test flights of HyFlyer II’s Dornier 228 aircraft testbed are scheduled for later this year at ZeroAvia’s Kemble, UK, facility.

Gabe DeVault, the company’s Head of Testing and Applications, said: “The Hollister testing is a significant milestone for our new HyperTruck testbed and ZA-600 that also confirms the operation of our next-generation control system and software. Our US team is excited to support the important work of our colleagues in the UK and ultimately scaling up our proven hydrogen fuel cell integration for larger commercial aircraft engines, which the HyperTruck supports.”