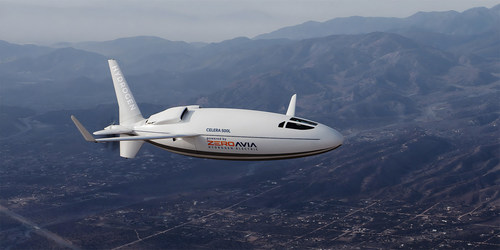 Otto and ZeroAvia have agreed to work together to incorporate ZeroAvia’s ZA600 zero-emission engines into Otto’s Celera aircraft. The Celera might be the first new airframe design to use zero-emission propulsion in its launch variants as a result of the partnership.

The Celera is a cutting-edge new form of transcontinental aircraft that can carry up to 19 people and dramatically increases flight efficiency while lowering operating expenses. This combination vastly increases the number of options for private flight travel.

Otto’s revolutionary airplane design has extremely minimal drag across the whole plane. The Celera fuselage, empennage, and wings are all designed to take advantage of laminar flow. Laminar flow is the lowest-drag option for airplane surfaces, with clean layers of airflow and little to no mixing between them. The Celera, when combined with extremely fuel-efficient motor technologies, will drastically cut operating costs and enhance range in comparison to comparable aircraft, while providing ideal passenger comfort and cargo capacity.

The Celera will allow long-range zero-emission flights when powered by ZeroAvia’s engine, while also lowering operating expenses owing to lower maintenance costs and declining hydrogen-fuel prices. The Celera’s architecture is well suited to storing significant amounts of hydrogen within the fuselage, allowing for a range of 1,000 nautical miles while having minimal influence on the environment from carbon and non-carbon emissions (like NOx, SOx and particulates). With non-carbon emissions from relatively inefficient, high-temperature combustion accounting for more than half of aviation’s total climate effect, long-range hydrogen-electric aircraft like the Celera will play a critical role in reducing all of aviation’s climate consequences.

William Otto, CEO of Otto Aviation, stated today in announcing the partnership: “The hydrogen-electric powertrain from ZeroAvia enables us to meet Otto’s objective to minimize operating costs and reduce the environmental effect of operators. Otto wants to produce the most efficient airplane possible in every way: lowering maintenance and operational expenses while also lowering emissions.”

Founder and CEO of ZeroAvia, Val Miftakhov, said: “To date, the majority of our commercial engagements have been on refit and line-fit for existing airframes, which is critical for bringing zero-emission aircraft to market as rapidly as feasible. However, advances in efficiency from innovative airframe design have the potential to broaden the impact of zero-emission aircraft. We’re excited to work with innovators like Otto Aviation to bring cutting-edge clean-sheet concepts to market since we can optimize the hydrogen-electric propulsion system for them.”

ZeroAvia’s goal is to put hydrogen-electric engines in every plane since the technology is the most viable, cost-effective, and far-reaching option for decreasing aviation’s climate change and clean air impacts. Hydrogen-electric engines create energy from hydrogen in fuel cells, which is then used to power electric motors that spin the aircraft’s propellers, with water as the sole waste.