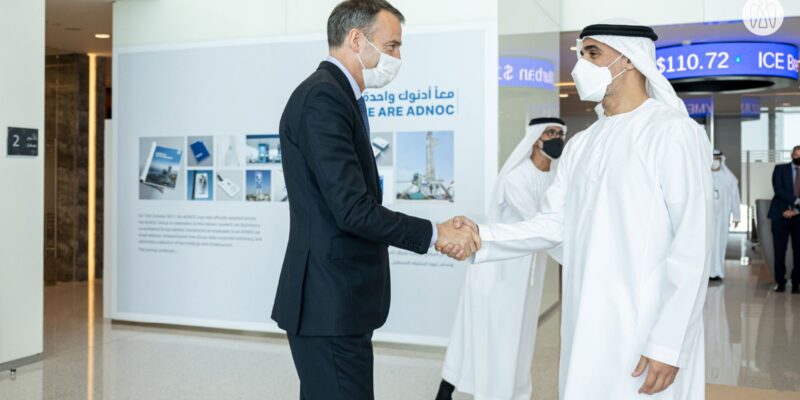 BP has made a significant step forward in extending its strategic cooperation with Abu Dhabi’s ADNOC and Masdar, bringing worldwide involvement to its planned blue and green hydrogen operations in Teesside, England.

In the design stage of bp’s blue hydrogen project, H2Teesside, ADNOC will have a 25% interest. This is ADNOC’s first investment in the United Kingdom. bp and ADNOC will now move on with the project, initially to the pre-FEED stage of design. With the building of two 500MW hydrogen production units by 2030, H2Teesside is planned to jumpstart the UK’s hydrogen industry at scale. The project is scheduled to begin operations in 2027.

Masdar has also agreed to buy a share in British Petroleum’s projected green hydrogen project, HyGreen Teesside. Starting in 2025, this project is expected to generate 60MWe (megawatt electrical input) of hydrogen, with the capacity expanding to 500MWe by 2030.

Together, these two projects may meet 15% of the UK government’s recently increased 10GW hydrogen output target for 2030.

BP will also collaborate with ADNOC to assess a new blue hydrogen project in Abu Dhabi, performing a collaborative feasibility assessment for a world-scale, low-carbon hydrogen project. ADNOC, BP, and Masdar have also teamed up with the Abu Dhabi Waste Management Centre (Tadweer) and Etihad Airways to investigate the manufacture of sustainable aviation fuels in the UAE using hydrogen and municipal waste gasification.

“By teaming up with ADNOC and Masdar, we are reinforcing the world-leading role that Teesside, and the UK more broadly, can play in generating new energy supplies, as well as new skills and supply chains,” said Bernard Looney, bp’s chief executive. We support Britain because its resources, capabilities, and net-zero goal make it perfect for the development of low-carbon hydrogen – and by working together, we can make a big contribution to the UK’s newly heightened hydrogen ambition.

“Our worldwide relationship with ADNOC and Masdar will help our goals to decarbonize some of the world’s most difficult-to-abate sectors, such as industrial manufacturing, electricity, and aviation, in addition to promoting home-grown energy.” Partnerships like this go beyond national lines to give the world the new energy solutions it requires, and I thank Dr. Sultan for his continuous efforts to assist solve the energy trilemma of delivering secure, cheap, and greener energy.”

“ADNOC and Masdar’s deepened partnership with bp is a testament to the UAE and UK’s longstanding track record of bilateral partnership in sustainability as well as the UAE’s intent to play a leading role in the fast-growing clean hydrogen economy both domestically and internationally,” said H.E. Dr. Sultan Ahmed Al Jaber, UAE Minister of Industry and Advanced Technology, ADNOC Managing Director and Group CEO, and Masdar Chairman. To that end, we are excited to cooperate with BP in both the UAE and the UK, establishing the framework for a longer-term commercial relationship in the areas of renewable energy and sustainable technology. Our position in Teesside will be ADNOC’s first investment in the UK, and it will help to advance energy decarbonization innovation in industrial sectors. In Abu Dhabi, the partners’ partnership is intended to strengthen the UAE’s position as a regional leader in low-carbon energy and technology-driven industrial growth.”

“Today’s agreements will enhance the strategic cooperation between Masdar, ADNOC, and bp and continue to push sustainable energy innovation for both the UAE and the UK,” said Mohamed Jameel Al Ramahi, Masdar’s chief executive. Masdar has been a long-time supporter of the UK’s renewable energy industry, and we’ll use our experience in offshore wind and sustainable aviation fuels to help both countries transition to clean energy while securing the UAE’s leading position in the burgeoning green hydrogen economy.”

These new agreements follow the establishment of strategic collaboration for sustainable energy solutions in the UK and UAE by BP, ADNOC, and Masdar in September 2021, which included the desire to collaborate on the development of low-carbon hydrogen hubs, such as those in Teesside. These efforts are subject to the required regulatory approvals.

India seeks to collaborate with France on green hydrogen