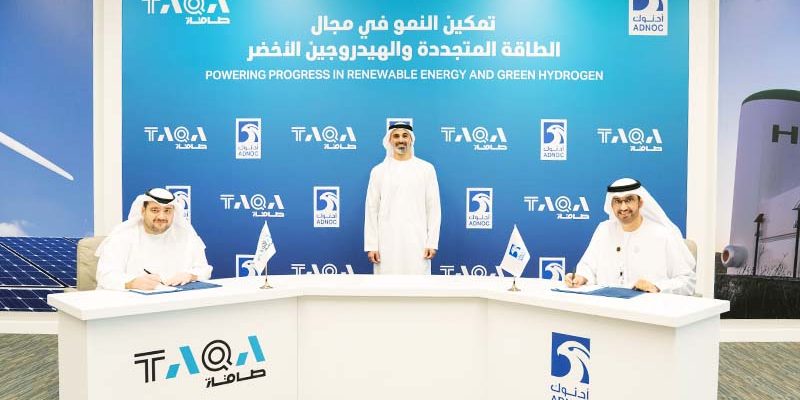 His Excellency One of the most prominent members of the Abu Dhabi Executive Council, Sheikh Khaled bin Mohamed bin Zayed Al Nahyan, has launched a new global renewable energy and green hydrogen venture with Abu Dhabi National Oil Company (ADNOC), as well as the Chairman of the Executive Committee of the Board of Directors of Abu Dhabi National Energy Company PJSC (TAQA).

A total of 30 Gigawatts (GW) of renewable energy will be generated by Abu Dhabi’s two energy giants by 2030, putting the United Arab Emirates (UAE) and Abu Dhabi at the forefront of the energy transition and advancing its global leadership role in green hydrogen. There are numerous renewable energy and waste-to-energy projects in both the United States and abroad that will be a focus of the new strategic partnership. Together, ADNOC and TAQA intend to build on their respective strengths in the energy and hydrogen sectors, as well as in renewable energy.

Sheikh Khaled bin Mohamed bin Zayed, the ruler of the United Arab Emirates, applauded both companies for their “visionary partnership” and emphasized how the country is advancing practical solutions and capitalizing on opportunities to achieve its “Net-Zero by 2050 Strategic Initiative.”

Speaking at ADIPEC, H.E. Dr. Al Jaber said: “Today’s strategic partnership between two Abu Dhabi energy giants future-proofs ADNOC’s business model, creating compelling business and commercial opportunities, as we fully embrace the energy transition. This innovative and collaborative venture is a bold new initiative, as it combines both companies’ respective areas of expertise and paves the way for our viable entry into the clean energy space. This platform will enable ADNOC to capitalize on the many renewable energy and hydrogen opportunities, both locally and globally. Building on ADNOC’s highly successful partnership and growth model, we invite other partners to join this promising new venture on its exciting journey.”

One of the world’s largest clean energy companies, ADNOC and TAQA, have formed a groundbreaking partnership that brings together their expertise in the development and optimization of renewable energy and ADNOC’s efforts to create domestic and global hydrogen value chains.

H.E. Mohamed Hassan Alsuwaidi said: “TAQA has set out to become a champion for low carbon power and water and is already a world leader in solar power. This partnership between TAQA and ADNOC will be a powerful catalyst to unlock significant potential for accelerating the green hydrogen market and rapidly expanding renewable energy. TAQA is supporting Abu Dhabi’s aim to be a green hydrogen hub using our expertise in low-cost solar PV and desalinated water: two critical elements for green hydrogen.”

Additionally, the United Arab Emirates is home to some of the world’s largest and lowest-cost solar plants, making it an ideal location for this partnership. Also, this partnership will benefit from the availability of low-cost renewable energy in the UAE and the country’s proximity to significant future demand centers for hydrogen and its carrier fuels in the region.

Joint venture agreements will be drawn up between ADNOC and TAQA, and both parties will be required to obtain relevant regulatory and third-party approvals for the transaction. ​