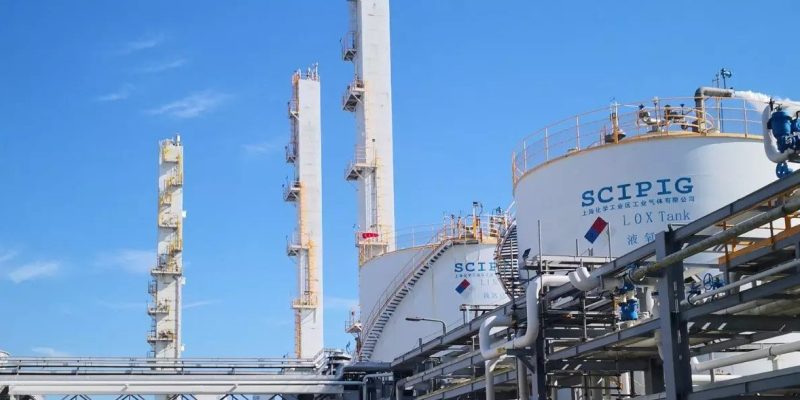 These units are intended to replace the current supply from a coal-based gasification unit owned by a third party, will be fitted with CO2 capture and recycling technology, and will be connected to SCIPIG’s existing local network. In addition to the two hydrogen units and four air separation units that SCIPIG presently operates in the Park, these two units will be added.

These facilities will manufacture hydrogen and carbon monoxide to supply Covestro China and Shanghai Lianheng Isocyanate Company (SLIC, a joint venture led by BASF and Huntsman) in the Park, as well as mobility, other industrial, and electronics customers in the Yangtze River Delta megacity. The combined hydrogen (H2) production capacity of the two plants will be approximately 70,000 Nm3/h. They will be outfitted with units that absorb and recycle carbon dioxide (CO2) in order to contribute to the generation of carbon monoxide (CO) with a total capacity of 28,000 Nm3/h.

Air Liquide Engineering & Construction will design and construct the two Steam Methane Reformers (SMR), which are scheduled to become operational in phases beginning at the end of 2023. In addition to replacing a third-party coal-based gasification unit, they will be outfitted with CO2 recycle units and connected to the current SCIPIG local network. This will prevent the release of 350,000 tons of CO2 annually, which is equivalent to the electricity-related emissions of one million Chinese homes. Connecting the production units to SCIPIG’s local pipeline network will increase the gas supply’s dependability and adaptability.

Since 1996, Air Liquide has actively contributed to the growth of the Shanghai Chemical Industry Park. The park is located next to one of the busiest container ports in the world, the Shanghai Yangshan port, and is home to large multinational and local chemical firms. Air Liquide recently announced the formation of a joint venture with Shenergy and SCIP to use the hydrogen produced by SCIPIG to offer hydrogen refueling stations throughout the Yangtze River Delta and assist the region’s rapidly expanding hydrogen vehicle industry.

François Abrial, Member of the Air Liquide Group’s Executive Committee supervising Asia Pacific, said: “These new investments further enhance Air Liquide’s long-term collaboration with Covestro, SLIC and Shanghai Chemical Industry Park. Leveraging our expertise in hydrogen production as well as carbon capture and utilization, the project demonstrates our capacity to bring solutions for our customers which are reliable, competitive, and beneficial to the environment. A specialist in the decarbonization of the industry, Air Liquide is proud, with this project, to support Shanghai’s ambitious climate plan.”

Holly Lei, President of Covestro China, stated: “We are pleased to further strengthen our partnership with SCIPIG in the Shanghai Chemical Industry Park. The new investment will provide a reliable supply of important raw materials to Covestro Integrated Site Shanghai. In addition, we will realize the synergy to reduce the carbon footprint of hydrogen, which as a fuel can contribute to a low-carbon mobility in the Yangtze River Delta Region. In this regard, our ambition to become climate neutral goes hand in hand along the value chain and beyond the company boundary.”

Ma Jing, Director of Shanghai Chemical Industry Park Administration Committee, said: “We welcome SCIPIG’s new investment in the park. Bringing in innovative technologies, it will help us to transition away from coal-based gas production and drastically reduce associated carbon emissions. At present, SCIP is actively implementing a new roadmap for green and low-carbon development in line with the national strategic deployment. SCIPIG’s new investment will play an important role in reducing carbon emissions in the park. SCIP will, as always, assist in facilitating the construction and operations of this project and in promoting the use of low-carbon hydrogen to contribute to our common carbon peak and carbon neutral objectives.”