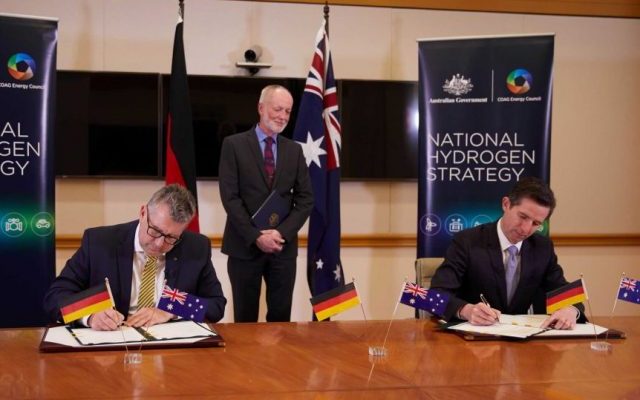 Australia and Germany have signed an agreement to expand the capacity of Australian hydrogen exports to Europe.

Australian hydrogen could allow Germany to decarbonize its energy supply after the two governments agreed to examine the feasibility of establishing a hydrogen supply chain.

The plan could provide a roadmap for Germany to meet its emission reduction goal of 55 per cent by 2030 as part of the longer-term net zero emission goal by 2050.

With minimal renewable energy supplies and the highest electricity consumption in Europe, Germany has cut its efforts to meet the emission reduction targets and is searching for ways to import renewable energy.

Hydrogen is an evolving prospect that releases no pollution when generated with renewables and can be transported by purpose-built carriers around the world.

Under the scenario, a plethora of low-cost energy from wind and solar farms will be used to fuel hydrogen electrolysers, with pollution free of hydrogen exported around the world to countries that are now dependent on gas and coal imports.

Australia’s position as a gas exporter places it well among potential hydrogen producers, thanks to proven supply chains and trading relationships with energy-importing nations, infrastructure and no lack of gas expertise.

In view of the fact that it is difficult to say how a hydrogen unit was made, the National Hydrogen Working Group introduced a certification scheme with a guarantee of origin so that consumers can be assured that hydrogen meets local environmental and corporate obligations.