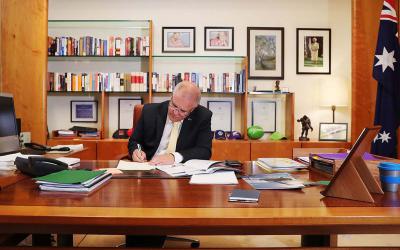 Australia and Singapore will collaborate on a $30 million project to expedite the use of low-emission fuels and technology such as clean hydrogen in maritime and port operations.

“We are positioning Australia to succeed by investing now in the new technologies that will support jobs and industries into the future.

“We are working with our international partners and neighbours on practical commitments that will support technological innovation,” Minister for Energy and Emissions Reduction Angus Taylor said.

“Our joint investment with Singapore will attract investment into Australia, create jobs, reduce global emissions and help deliver on the goals of the Technology Investment Roadmap.”

The Australia-Singapore agreement is part of the Government’s $565.8 million pledge to establish new international technological collaborations that will reduce the cost of low-emission technologies and stimulate investment in Australian-based enterprises that will generate up to 2,500 jobs.

The alliance recognizes Singapore’s importance as a worldwide shipping center and Australia’s goal to become an emerging leader in the rising usage of clean hydrogen and ammonia. This agreement builds on an existing MOU between Australia and Singapore on low-emission technologies and solutions. Each country will commit up to $10 million over five years to fund industry-led pilot and demonstration projects, with an extra $10 million expected from industry.

The program will assess the feasibility of using clean hydrogen, clean ammonia, and other hydrogen derivatives in shipping and port operations, as well as the potential for hydrogen demand from the marine sector. By increasing demand for future low-emission energy exports, Australia’s developing hydrogen industry will be able to expand, attract investment, and create jobs.

This is crucial if the Technology Investment Roadmap target of manufacturing clean hydrogen for less than $2 per kilogram (‘H2 under 2’) is to be met. Establishing realistic international relationships is a critical component of the Government’s plan to speed the development of the Roadmap’s five priority technologies, with Dr Alan Finkel, Australia’s Special Adviser on Low Emissions Technology, playing a critical role. Australia’s Technology Investment Roadmap aims to attract at least $80 billion in new investment in low-carbon technologies by 2030, supporting more than 160,000 jobs.

Fuel ell systems to be critical component of Rolls-Royce portfolio

Gigastack Video – A glimpse at the future of renewable hydrogen