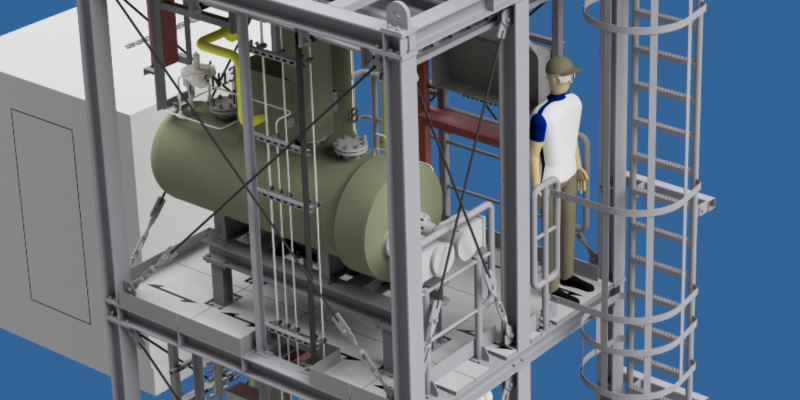 Bilfinger is developing a demonstration plant for the drying of green hydrogen. The joint project with the Institute of Thermodynamics at Leibniz University in Hanover and EWE GASSPEICHER GmbH, Oldenburg is funded by the German state of Lower Saxony and is an important component of the energy transition.

The process enables efficient and large-scale hydrogen treatment for the storage of hydrogen and subsequent on-demand grid feed-in. The plant will be delivered to Rüdersdorf in Brandenburg in early 2023.

In the new process, hydrogen is dried by absorbing moisture using a suitable scrubbing liquid. Bilfinger is drawing on its many years of experience and expertise with a process that is already used on a large scale for natural gas in gas storage and has been characterized by reliability and efficiency for decades.

The storage of green electricity – i.e. electricity from renewable sources such as wind and sun – is a major challenge of our time. Hydrogen offers itself as an important storage medium. The energy of the electricity is converted into hydrogen and – similar to natural gas – is to be injected into so-called caverns in deep layers of the earth and stored safely and for the long term. EWE GASSPEICHER is currently working on this proof in a research project in Rüdersdorf, Brandenburg. The hydrogen must then be dried before it can be fed into the grid and transported further. The technology used by Bilfinger makes it possible to treat hydrogen economically and efficiently on a large scale. After storage – for example from the cavern – the hydrogen is dried and then either immediately converted back into electricity or fed into the transport network. This allows consumers to be supplied with energy as flexibly as with natural gas.

“The implementation of this project is a major step forward for the energy transition. Decentralized hydrogen drying by absorption for gas storage and grid feed-in is an essential step for the hydrogen economy. With this technology, hydrogen can be treated economically on a large scale and this enables the integration of renewable energies into our energy system. In this way, hydrogen produced with the help of wind and solar power or hydrogen soon to be stored in caverns can be fed into the transport network,” says Lower Saxony’s Environment Minister Olaf Lies.

The project is being realized by Bilfinger Engineering & Maintenance GmbH from Cloppenburg in Lower Saxony, which is designing and manufacturing the plant. “With this innovative development, we are now using our experience of the last decades, during which we have built natural gas drying plants throughout Europe, for the energy turnaround through green hydrogen, and we are grateful for the funding of the project by the Lower Saxony Ministry of the Environment,” said Karsten Hoffhaus, Chief Operation Officer of Bilfinger Engineering & Maintenance GmbH.

Other partners in the alliance include both the Institute of Thermodynamics at Leibniz University in Hanover, which is providing scientific support for the project, and EWE GASSPEICHER GmbH, on whose storage facility the hydrogen drying process will initially be operated and tested. Following this test phase, the plant will be integrated into hydrogen production in 2023 / 2024 so that hydrogen can be dried before being fed into the pipeline network.

Bilfinger offers services along the entire hydrogen value chain: from production to storage, delivery and use. The services include consulting and engineering, subsequent plant construction and design & build services (general contractor) as well as all maintenance and services. In the Netherlands, for example, Bilfinger is currently contracted for the basic engineering of a compressor plant by gas network operator Gasunie to store hydrogen in underground caverns in the so-called HyStock project.