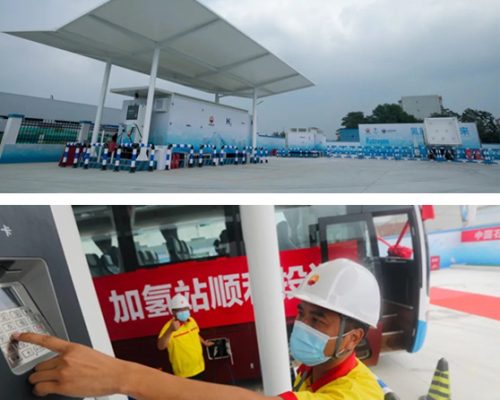 This is the first hydrogen station built by China National Petroleum Corporation (CNPC) in Beijing. CNPC and Beiqi Foton Motor Co., Ltd. (Foton) jointly built the hydrogen station in Changping District, covering an area of around 1,700 square meters. It has a daily refueling capability of 600 kg, which means it can provide around 50-60 hydrogen fuel cell buses with hydrogen fuel each day.

Hydrogen fuel cell vehicles (FCVs) were among the many vehicles that were fueled with the help of a hydrogen station set up by CNPC (China National Petroleum Corporation) in Chongli District, Zhangjiakou City, during the Olympics’ test events.

For the 2022 Winter Olympics, the CNPC hydrogen stations are primarily used to fuel buses and vehicles with a hydrogen fuel cell technology that are customized for the event, but they also showcase the “Green Olympics” to the globe.