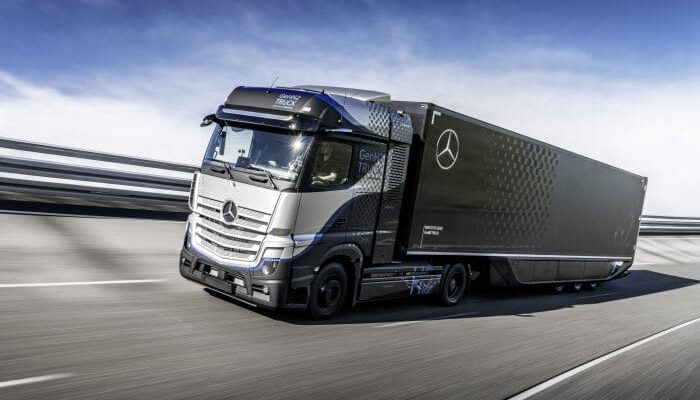 For flexible and demanding long-haul transport, Daimler Trucks is working on hydrogen-powered fuel cells for electrification.

It aspires to have ranges of 1,000 kilometers or more without needing to refuel. The truck maker started rigorous testing of the first new upgraded prototype of its Mercedes-Benz GenH2 Truck, which will be unveiled in 2020, in late April. This is a significant step on the road to series production. Daimler Trucks engineers are putting the fuel-cell vehicle through its paces during these tests. The lengthy series of tests puts the vehicle and its components to the test, focusing on things like continuous operation, diverse weather and road conditions, and diverse driving maneuvers, among other things.

The vehicle will also be tested on public roads by the end of the year, according to Daimler Trucks’ growth strategy. Customers will be able to participate in customer trials starting in 2023. In 2027, the first series-produced GenH2 Trucks are planned to be delivered to customers.

Martin Daum, Chairman of the Board of Management of Daimler Truck AG and Member of the Board of Management of Daimler AG: “We are consistently pursuing our technology strategy for the electrification of our trucks. We want to offer our customers the best locally CO2-neutral trucks — powered by either batteries or hydrogen-based fuel-cells, depending on the use case. We’re right on schedule and I’m delighted that the rigorous tests of the GenH2 Truck have started successfully.”

“The hydrogen-powered fuel-cell drive will become indispensable for CO2-neutral long-haul road transport in the future. This is also confirmed by our many partners with whom we are working together at full steam to put this technology on the road in series-production vehicles. Moreover, considerable momentum is being generated by the clear commitment of national and European regulators to the use of hydrogen for road freight transport. Political support plays an important role in promoting the creation of an infrastructure for green hydrogen and making an economically viable use of fuel-cell trucks possible for our customers,” Daum adds.

Demanding testing for a total of 1.2 million kilometers of operation

The GenH2 Truck is being designed by Daimler Trucks development experts to meet the same durability criteria as a comparable traditional Mercedes-Benz Actros vehicle. This equates to 1.2 million kilometers on the road and 25,000 hours of operation during a ten-year period. As a result, much like every every new Actros generation, the GenH2 Truck must pass stringent tests. Hundreds of kilometers have been covered under continuous load on a road-to-rig test stand, and the vehicle has been put through various extreme situations modelled on real-world operating conditions over the first several weeks of testing. Emergency braking and kerbstone drives on the test track are two examples.

From the ground up, the GenH2 Truck has been redesigned. It has entirely new components, which the developers are concentrating on during the testing. The fuel-cell system, the all-electric engine, and all accompanying systems, such as the unique cooling unit, are among these components. Furthermore, the weight and location of the new components in the vehicle have an impact on the truck’s handling characteristics. As a result, vibrations induced by uneven roads, for example, and especially extreme situations, subject the fuel-cell truck to forces that are distinct from those experienced by conventional cars. To gather as much information as possible at this early stage, the current prototype is loaded with a payload of up to 25 tons for a gross vehicle weight of around 40 tons, which is identical to the specs envisaged for the GenH2 Truck’s series-produced edition.

Daimler Trucks chooses liquid hydrogen over gaseous hydrogen because the energy carrier has a much higher energy density in comparison to volume in this state. As a result, the tanks of a liquid hydrogen-powered fuel-cell truck are much smaller and lighter due to the decreased pressure. This allows the vehicles to carry more stuff and have a higher payload. At the same time, more hydrogen may be transported, extending the range of the trucks dramatically. As a result, the GenH2 Truck series, like conventional diesel trucks, is well suited to multi-day, difficult-to-plan long-haul transport with significant daily energy throughput.

On the basis of a predetermined development strategy, Daimler Trucks experts are pushing forward with the development of tank technologies for liquid hydrogen. By the end of the year, the engineers hope to have the new prototype tank system mature enough to be employed in the GenH2 Truck’s ongoing tough tests. Vehicle testing will then be limited to liquid hydrogen tank systems until the series-production stage is achieved. Until that time comes, the GenH2 Truck’s thorough interior testing will rely on a gaseous hydrogen tank system as a temporary solution. Daimler Trucks is demonstrating that both gaseous and liquid types are technically feasible.